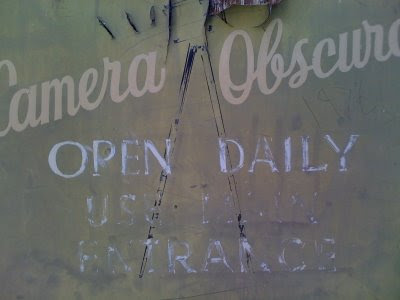 Yesterday Paul and I spent the day in San Francisco. I'd read that there was an old camera obscura at the Cliff House, but yesterday when Paul and I walked around that marvelous, unlikely place. I assumed that the old optical amusement had bitten the dust, but it turns out we just didn't walk far enough around the building. The small building, which is itself a giant camera, is just around on the south side of the building, and it's on the National Register of Historic Places, so it'll be there when we go back. It was built by a fellow who also designed structures like it at the Garden of the Gods and at Lookout Mountain, though both of those are long gone. The sign above is one I photographed above the beach in Santa Monica; as far as I could tell, the camera itself is shuttered now (forgive the pun), but the sign's still tempting. For a wonderful site with many examples and much info, click here.
Posted by Mark Doty at 11:39 PM

Mark:
Watching you and Paul discover San Francisco brings back vivid memories. The Cliff House, where I spent some lovely afternoons and brightly lit nights had, when I was there, large windows in simple white walls, plain wooden floors, a fireplace, an antique sofa with silk fabric, and a stuffed bear. Who could want more?
The first time I joyfully launched myself into the Pacific, I almost drowned, as it's the Atlantic that is more the pacific.
The quality of light is exceptional in San Francisco, or perhaps in California entirely, as it is in only a few other places, Amsterdam being one. Is this something we are losing as the air burns more chemically every year?
There is another Cliff House memory I have. There were signs warning of the danger of standing too close to the edge, though frequently ignored. Waves would hit with such force, they'd pull off the rocks anything standing there. I had brought an out of town visitor there on a sunny January afternoon. The fire department came while we were there to recover the body of a young man who had, like others, stood too close to the continent's wild and ragged edge.
On the farther reaches of Long Island, the air is clean and the sun golden in the bluest sky, but as you go west, the land grows more untamed, so that by the time you reach San Francisco, you can die simply for having been caught by the beauty of the windswept trees, the cliffs, the bluest sky and the crazy harshness of the waves coming off of the ocean in the afternoon of any ordinary day.