Goodbye to the west coast 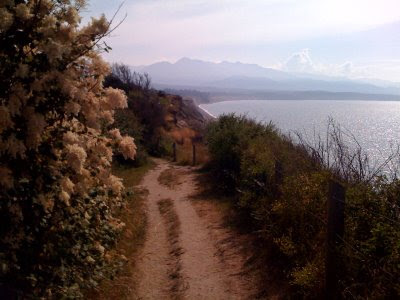 This photo's from our outing to Sequim, WA, which turns out to be the lavender capital of the nation. You wouldn't expect there'd be enough sun on the Washington coast to allow big fields of lavender to thrive, but there they were, glowing in the sun -- for whose appearance we were very grateful. This photo was taken at the head of the Dungeness Spit, looking back toward the Olympic Range.

Tonight we're in Seattle, on the way home from the writers conference. After the spartan lodgings in the old fort on the bluff, this hotel room feels pretty well heavenly: a big firm bed, wireless access, even the cheery banality of the TV, all good. We've been for a walk on Capitol Hill, visited the excellent Bailey-Coy Books, had some Japanese noodles, and now a little rest before heading out into the city evening, a world away from the scene above.
Posted by Mark Doty at 9:45 PM

We loved having you visit our Washington.

That rain shadow where Sequim is located has some of the most magic sunlight of anywhere I've ever been. Truly wonderful part of the world.