Do I contradict myself? Very well then... 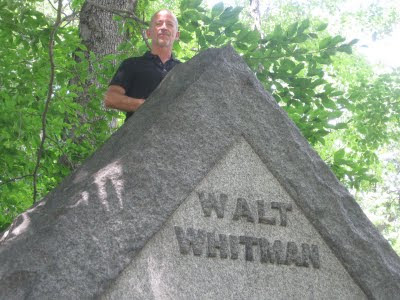 What a strange place, Walt Whitman's tomb. It's massive. Big granite plinths set into a shady (well, gloomy) hillside, with a huge stone door set ajar through which you can see a group of crypts, six of the Whitmans to be exact, though only Walt's name is chiseled on the stone outside for the world to see. Sometime, thirty or forty years ago, to judge by the style of the stone and the already-worn engraving, somebody placed another stone in front of the tomb, carved with some of the final lines of "Song of Myself":

I depart as air . . . . I shake my white locks at the runaway sun,
I effuse my flesh in eddies and drift it in lacy jags.
I bequeath myself to the dirt to grow from the grass I love,
If you want me again look for me under your bootsoles.

This had to be an attempt to resist the monumentality and finality the tomb seems to suggest. But it's a little disquieting, to think that the poem of the 35-year-old Walt sits so uncomfortably beside the tomb the 72-year-old poet commissioned. No grass is drawing nourishment from that chilly chamber, unless it has mighty tenacious and powerful roots indeed!

He is more under our bootsoles, sure enough, than he is in that stony vault, but I might make a temple of granite, too, if I were afraid of disappearing, afraid of my work vanishing with me. Maybe. It's hard to imagine wanting to memorialize oneself in this way. He knew better, the Whitman of "Crossing Brooklyn Ferry," but how could the man in Camden, stroke-shattered and tired and never-quite-recovered from the War, how could he know that, too?
Posted by Mark Doty at 4:40 PM

Great photo, Mark. I want to visit there one day.

Mark, your visit and post remind me of this extraordinary Borges poem. I cut it out of the NYRB years ago (5/28/92) and don't know where else it's been published.

The smell of coffee and of newspapers.
Sunday and Sunday's tedium. Morning light,
And on the glanced-at page, frivolous and slight,
The unveiling of some allegorical verse
By a successful colleague. The old man
Lies ashen and exhausted in his decorous,
Shabby bed-sitting room. Idly he looks
At his face in the worn mirror once again
And thinks, now without wonder, that that face
Is him. A hand absently touches both
The frowzy beard and devastated mouth.
The end is near. He says, in a soft voice:
I am almost not, but in my verses' rhythm
Life moves in its majesty. I was Walt Whitman.
(1964)

oh... poor walt whitman. i want to bake him a cake that says, "i so much appreciate everything you said about the grass," or says that but in fewer words, or at least just bake the cake itself, and then he could enjoy it in a grassy place. though i also appreciate the bittersweet expansiveness of his contradictions!

Nice musings, Mr. Doty. At first glance of your picture in my Reader, I thought the same thing. What the hell is Whitman doing with that kind of grave.

I guess that's why this monument, which seems big but not capacious, feels so wrong.

Thanks for the post and thanks to the commenters, especially for the Borges poem. Maybe it's that I live within 2 miles of Harleigh Cemetery, but I love Walt Whitman's tomb.It looks out on a pool of water toward a bend in Cooper Creek. About a hundred yards away, Camden haiku poet Nick Virgilio's beautiful lectern monument looks out on the same water. A couple of miles downstream, that creek empties out into the Delaware right at the point where Ben Franklin slept on his first night in the Philadelphia area during his move from Boston.. Walt's tomb.is dark, and sure, it's a bit creepy to 21st century eyes, but it's also solid and I imagine that solid comes from the same root as solace.I like that his family is in there with him, and it's almost like you're looking into their living space except it's their dying space. Maybe the tomb reflects Walt's wish to be remembered, but at some level, he understood very well that, in a century or two or twenty, there will be "No picture, poem, statement, passing (us) to the future:" sooner or later, unlimn'd we all disappear.;

Thanks for your perspective, David. I imagine that, to an old fellow with a body made frail and unreliable by strokes (and, perhaps, arteriosclerosis brought on by a less-than-ideal diet), the solace of the solid would have been very compelling. And thanks for the info about the creek. Just now that seems a bit tamed, as it pools in the valley with an artificial jet shooting up, so it's hard to think of it as a tributary of the Delaware, but you help me to see it in a different context.