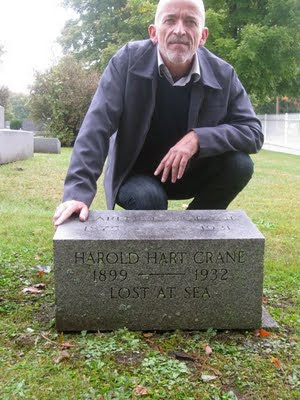 The picture above was taken on a bright gray Friday afternoon in Garrettsville, Ohio -- thus the harsh light. You can't see that on top of that same stone is inscribed the name and dates of Clarence Crane, Hart's father, a businessman and candy manufacturer, inventor of Life Savers candy and the proprietor of a shop and restaurant in nearby Chagrin Falls called Crane's Canary Cottage. Hart, of course, leapt from a ship called the Orizaba in the Gulf of Mexico in 1932; his body was never found. Exactly why his name is carved on the side of his father's headstone is mysterious to me; I don't know whether to ascribe it to lean times or family shame about the fate of their notorious ne'er-do-well son.

We had an extraordinarily moving day in Garrettsville. A number of friendly and helpful residents met us for lunch and proceeded to show us around. We'd parked on Main Street, right in front of the tavern that nows occupies the space where Crane's grandfather's maple syrup business stood. He used the roiling waters of the river coursing behind the storefronts to cool his product. Just down the block Arthur Crane's house still stands, a distinguished and solid-looking white frame residence from the 1890s. Next door he built a house for his son Clarence and Clarence's wife Grace, near the beginning of a spectacularly unhappy marriage. Hart was born in the house, in 1899, probably in a small room beside the kitchen. The current owners of the house, Dave and Kym Kirk, are proud of its history, and they welcomed us in and very kindly allowed a whole troop of visiting poets and scholars to wander through.

Garrettsville's position toward Crane seems a somewhat mixed one. There's the plaque in front of the house, but then there's another monument too, on a sidestreet near Main. It's an undersized boulder of very pink quartz, with a bronze plaque affixed to it, and it has a bit of a random look to it, as if it were a well-meaning gesture that has been set off to one side so it won't be too noticeable.

One of Crane's cousins, I'm told, gave quite a bit of money to a local academic institution, after her death, stipulating that the library that would be built with the money would be called the Hart Crane Library. They took the cash and gave the building no such name; apparently some college administrator didn't want the library to be known as "fairyland."

This puts me in mind of William Logan's absurd recent review of Library of America's newly issued edition of Crane; the critic asserted that the poet's life (and thus his work) had been damaged by "too many sailors." Presumably Logan knows the proper number of sexual encounters for good health, but I hope he never fills me in. I joke, but in truth the whole thing just makes me sad; the homophobia that did so much to swallow and erase Crane during his life continued long after his death, but who'd expect it to continue now? Logan has joined the company of Yvor Winters, who thought that Crane's poetry was permanently deformed because it lacked a "great subject" -- i.e., heterosexual love and reproduction. I suspect both critics may wind up being remembered more for these sad revelations of shoddy thinking than for anything else.

(And now I must go teach. More to come on this post later.)
Posted by Mark Doty at 8:06 PM

When I read about the failure to name the library for Hart Crane, I thought again about how difficult it often is to have one's after-death wishes carried out. It takes a dedicated, tough lawyer or family member. I could tell you stories. Thanks for taking us along with you on your trip.

Having just found the blog, already enjoying notes from your daily travels. A bittersweet one here--but still inspired to hear that great writers like yourself are still willing to push back against such a hateful tide.

I have long believed that all poets (well, male poets at any rate) at least secretly wish to be Hart Crane.

I’ve always been haunted about Hart Crane’s unfortunate demise, and on my last several visits to the bookstore, I’ve been tempted to purchase his book of poems. I’ve picked it up, flicked through the pages and then grudgingly put it back on the shelf, after listening to my inner self’s harangue about too many unread books on my own shelf…Well, after reading your account about your visit to Garrettsville, I think I’ll play a deaf ear to the next harangue…Great writing. Thank you.

I am planning a visit to Hart Crane's grave, as I am getting my grandfather's Royal Superior typewriter tuned up and I have to drive to Cleveland from Pittsburgh to do it. What cemetery is he buried in? I was guessing Harrington but I found about twenty in the area...<3