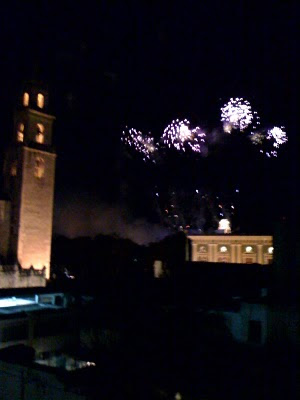 I write from The Italian Coffee Company, on Calle 62 in Merida, in the Yucatan. This place, which is smack in the centro historico, has the best coffee I've found here so far. The centro seems to be thronged with people all the time -- some of them tourists, but the majority are local, at least just now when this part of town's all athrum with doings for Three Kings Day. Last night I was just falling asleep when a very grave male chorus began in the street outside my room, their volume swelling. I'm used to lots of street music outside, but this was something else, as if the Stalingrad men's choir had come marching down Calle 60 outside my hotel. Then there was a huge explosion, as if some part of the hotel had just blown up, the walls and rafters literally ringing. Through the high bathroom window, I could see a streak of gold in the sky, over the Plaza Central. By the time I threw some clothes on and got out onto the terrace, Anne Waldman was already there in her glamorous black bathrobe, and Tim Siebles came stumbling out, and the three of us watched the sky light up over the square, to the wild roars of applause greeting the Feast of the Epiphany. Thousands of grackles were winging their way out of there, in shock over the explosions -- so the birds were streaking east and the fireworks flying up and the wind blowing big billows of smoke after the birds.
Posted by Mark Doty at 1:41 PM

And a fine picture.

What a spectacular image, Mark and how exciting for you all. It's lovely to get caught up in other people's celebrations.

Hi Mark,
I will be teaching there next year so I feel as if you've given me a coming attraction - and a tip on good coffee. Thank you!