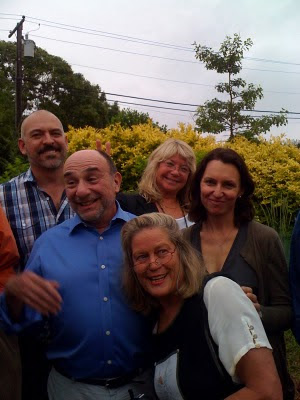 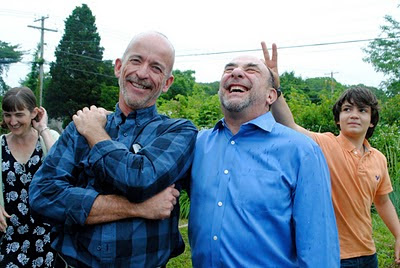 Yesterday my friend Phil Schultz gave a terrific reading at Guild Hall in East Hampton, a retrospective performance that moved through his new volume of selected poems -- and thus through a career -- offering a piece or two from each book, then concluding with a suite of new poems in which the breadth and spirit of the work that's come before felt both crystallized and amplified. It was really energizing.

Afterwards, dinner at Town Line Barbeque on Route 27 with a host of poets and artists, a sweet-spirited time. I was thinking about the sort of group snapshots that show up in the biographies of artists who've spent time out here over the decades, and these seem ripe for just that sort of thing.The picture on top was taken by yours truly: that's Paul, Phil, Star Black, Carol Muske Dukes, and Monica Banks. The second shot is by Star Black, and from left to right it's Julie Sheehan, yours truly, Phil, and then Phil's son Augie. This picture reminds me of old Chinese poems, scenes where the poets gather in some mountain hut or tavern someplace, a brief respite from the rest of the world, some joyous hour.

While I'm at it, here's a piece I wrote about Phil's new book, THE GOD OF LONELINESS: New and Selected Poems, for the East Hampton Star. There is, of course, a potential ethical issue in reviewing friends' books, but the fact is that if poets don't write these things, who will? And in truth I'd rather call this an appreciation than a "review" anyway -- poets of this stature don't require reviewing, but perhaps something more like a description of the way they've become fully, unmistakably themselves.
Posted by Mark Doty at 10:23 AM

Hi Mark, a word from California...
I met you at San Jose State Univ in Feb 2009, or gosh, was it even earlier? I really admire how famous and published poets marvel at each other's work and enjoy and talk about it without any reservations, or sense of competition-all in a spirit of comrardarie and joy of poetry. That is in true spirit of being a poet- to share the love of words with friends and followers. I enjoy reading your blogs and of course, your poems. Have a great rest of the year! Pushpa