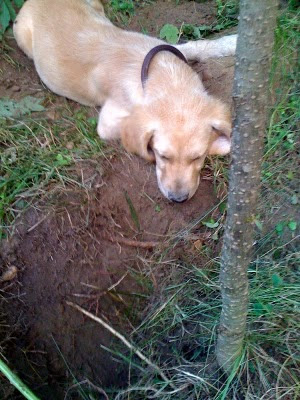 In a couple of hours I will be fifty-seven, which is a gigantic relief to me. Fifty-six has been a hard year in general, but it's acquired a particular dark charge because it's the age my mother was when she died, in 1976, of cirrhosis of the liver. At first I thought my aversion to the year was a a kind of magical thinking, but then I learned that if indeed it is I'm not alone with my folly; a number of friends have spoken of their own difficulty in passing through the age of a parent who'd died at her own hand, or perished to some addiction. Perhaps we just don't want to outlive our parents, so to speak -- can we succeed where they did not, is that permitted? Or perhaps it's the fear of a toxic legacy, an inescapable inheritance.

But now I am about to leave fifty-six, alive and breathing, reasonably intact. For the occasion I've been making gestures toward the future. One of them is above: Ned, with whom I am entirely in love, and to my mind quite reasonably so. With good luck we're going to be together now for a a long time to come. And this evening I went over to my neighbor Joanne's and dug up a young catalpa tree, which is going into my garden in the morning. I've always loved them: the big virile leaves, their pungent scent -- does "pungent" really convey anything at all? Think green tomato stems, tannic acid like black tea leaves steeped a little too long. And the word, catalpa, with its Whitmanic echo of Native American speech, something southern in those three vowels, inviting one to extend the a's... In the picture, Ned is resting his head in the hole I'd been digging around the slender trunk, which you can see on the right hand side of the image. After I finished, Joanne and I had some French rose' and listened to the screech owls announcing the twilight. We tried to think why just that moment -- are they waking, is it suddenly dark enough, or cool enough, for the world to begin?

So, a good fifteen years with Ned (knock on the wood of the table where I write), decades of catalpa after I'm gone. Tomorrow Paul's taking me out to celebrate -- presents, lunch, a nursery I like in Montauk? -- and that will be all about the present. But this evening's solitary goodbye to fifty-six has entirely to do with days to come.
Posted by Mark Doty at 6:43 PM

Happy Birthday Mark, I hope you have a day encased in fun, love and good things!

I also know the solitude in passing a parent's birthday. May your days be many and full of more joy than sorrow

Certain milestones a dreaded portent carry,
None but the carrier can properly fathom.
Why think we ourselves so tied to a fate,
Destined but to repeat what once was lived?
Was that once not enough? Does fate so tempt
That we forget that each his or her own trajectory
Must endure? - Unique in nature, and duration.

Happy Birthday! This summer your resonant writings have nourished my being, and I am still reading... now "The Art of Description" - much needed, as the above attests.

Happy birthday! Ned will certainly bring you days full of sweet-sad faces. He will grow into that collar quicker than you planned. He may even try to lick your nose as you scold him for eating your favorite sandal. But, no matter how much you may miss that particular pair of shoes, there's no better way to gesture toward the future. Enjoy your day.

It's called 'family time', Mark - the idea that we repeat certain things at certain times that coincide with events in the lives of our parents that they may not have 'processed' at the time.

My father died on 27 February, 1982, the same day - 27 February - on which his first daughter had died during the Hunger winter of 1945. He died aged 65, the same age at which as his father and his father's father had died before him.

Uncanny, I say, not just coincidence.

Happy birthday, Mark. In November I'll be a year older than you. For the next three months our ages coincide. Fancy that.

Thanks to you all for the good words. I am so interested in that term "family time," Elizabeth -- do you remember where you got that? I've not heard it discussed as a recognized phenomenon, and I'd like to find out more about how it's been described.

Happy Birthday. Knocking on a catalpa for you, indeed.

I was once given an assignment to make a timeline of the ups and downs of my life, and also to interview my mother on her ups and downs and make her time line. The ups and downs are drawn as a graph along the timeline...and they resembled one another.

Happy Birthday!
It's very hard, I think, to overcome the ramifications of a parent's addiction. Luckily a fellow like Ned doesn't usually carry many of those difficulties. He's quite beautiful. And catalpa trees don't have those problems. And 57 sounds good.
thank you.

Happy-B-day Mark! Yes, as we age and march past the chiseled dates on the tombstones of those we loved or those who created us, we come into the odd sensation of elegies of the future....

Did you know that the oldest known Catalpa tree is the 150 year old specimen in the Minster graveyard of St Mary Butts (that's not a typo) in the town of Reading in Berkshire, England?

Happy Birthday!
Your work means the world to me.
I hope I look as a good as you when I am your age (I also turned 56 this year).
My verification word is PROWIS.

Happy birthday, Mark. Much love, and gratitude for all you've given us, your readers.

Congratulations, Mark, on successfully negotiating all 365 days of your 57th year. Now get to work on your 58th.

ah, the markers of time. birthdays always bring out the melancholy in me...even when I was 5!! It must be that point in time that we can touch, and remember all that it is connected to. Now, may you outlive your mother by many many years!

Nice post Mark. Our seasons spinning around and the months and years that pass always makes one wonder in a certain profound way.Happy Birthday to you and it is so nice to see a picture and to read the words of friendship and love between a 'boy' and his dog. Also, the Catalpa tree down here in Missouri is very much planted and desired due to its infestation of a certain catapillar.(Great bait for local catfish fishermen in the Ozarks and many other places) Take care and peace. signed Bobby C. (Elijah, MO)
www.missourimoon.com

A belated Happy Birthday to you, Mark, and congrats on the new furry family member.

Happy birthday. May Ned celebrate you with much in-your-face puppy breath.

I remember 57 well. It was seventeen years past the age my own mother left this earth, dying of the same disease as your mother. And then, when I left 59 in the dust a few years ago, I passed the age my mother's mother lived to see until her heart gave out. And every year I gain on the line of women who came before me and out of one of whose bodies I ultimately crawled I become more and more grateful for the chance they nonetheless gave me to be in this world at all and now to continue to breathe. May all your days be filled with the joy that beckons on the other side of sorrow. Happy Birthday, belatedly.

Late, late--but Happy Birthday and many more to come.