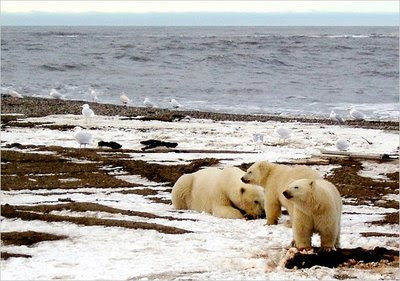 Here's a thorough, well-researched short piece on Gov. Palin's phony, opportunistic stance on climate change, and on the kind of junk science used to support her destructive stance.

On September 26, 2008, 61 Nobel laureates announced their endorsement of Barack Obama. Their letter of endorsement opens with (pdf):

This year's presidential election is among the most significant in our nation's history.

During the administration of George W. Bush, vital parts of our country's scientific enterprise have been damaged by stagnant or declining federal support. The government's scientific advisory process has been distorted by political considerations... We have lost time critical for the development of new ways to provide energy, treat disease, reverse climate change, strengthen our security, and improve our economy

A specific example of science distorted "by political considerations" is given by a December 12, 2007 House Committee on Oversight and Government Reform Report. In summary:

This report presents the findings of the Committee’s investigation. The evidence before the Committee leads to one inescapable conclusion: the Bush Administration has engaged in a systematic effort to manipulate climate change science and mislead policymakers and the public about the dangers of global warming.

As their habitats are threatened by climate change, polar bears have become a primary symbol of the impending effects climate change will have on the entire planet. So, it was predictable that those master manipulators of climate science, the global warming deniers, set their sights on the polar bears.

Around the same time the House Oversight Committee's report was released, a story came out regarding Exxon-funded polar bear "research":

While recognizing the possible impact of climate change on the polar bear, the authors concluded "it is simply not prudent to overstate the certainty" that climate change, or any other single factor, is responsible for "observed patterns in polar bear population ecology." The article, which was labeled a "Viewpoint" essay because it contained no new research, was published in the September issue of the Journal of Ecological Complexity.

In their conclusion, the article's authors thanked ExxonMobil and the American Petroleum Institute for their financial backing. They noted that the paper's views were "independent of sources providing support."

Many of the articles referenced by the paper were by the same authors and other global warming deniers, all of whom have been prominent mouthpieces for a variety of Exxon-funded think tanks.

Fast forward to May 2008. The polar bear was listed by the US government as a threatened species, and Alaska's government responded by filing a legal challenge. Alaskan politicians also scrambled to fund "research" proving that the bears are - you guessed it - not in any trouble at all. Of course, one of the first "scientists" they called is yet another global warming denier.

It turns out that Sarah Palin has played a starring role in the science fiction drama. The UK Guardian breaks the news:

The Republican Sarah Palin and her officials in the Alaskan state government drew on the work of at least six scientists known to be sceptical about the dangers and causes of global warming, to back efforts to stop polar bears being protected as an endangered species, the Guardian can disclose. Some of the scientists were funded by the oil industry.

In official submissions to the US government's consultation on the status of the polar bear, Palin and her team referred to at least six scientists who have questioned either the existence of warming as a largely man-made phenomenon or its severity. One paper was partly funded by the US oil company ExxonMobil.

[Palin's] own Alaskan review of the science drew on a joint paper by seven authors, four of whom were well-known climate- change contrarians. Her paper argued that it was "certainly premature, if not impossible" to link temperature rise in Alaska with human CO2 emissions.

More from the Guardian:

The citation by Palin and her officials prompted complaints from Congress. One member, Brad Miller, dubbed the polar bear study phony science.

Palin told Miller: "Attempts to discredit scientists...simply because their analyses do not agree with your views, would be a disservice to this country." Miller now says that Palin's use of the paper shows she differs greatly from John McCain, the Republican presidential contender, who has pressed for scientific integrity. "Turning to the cottage industry of scientists who are funded because they spread doubt about global warming is not integrity," Miller said.

According to the article, the global warming deniers and/or skeptics cited by Palin's paper included:

The Guardian's findings show without a doubt where Sarah Palin stands on global warming, regardless of what she has said in recent interviews.

It also presents a disturbing view of what a potential McCain-Palin administration would look like. It would simply be a continuation of the Bush administration's science policies.

The only difference is that Bush admits global warming is real.