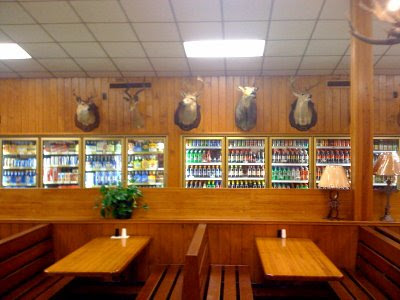 Yesterday Charlie Alcorn drove me from Houston down to Victoria, Texas, where I spoke on Walt Whitman and did a reading in the early evening for an assembled group of citizens (they actually ARE called "Victorians"). I liked the open and eager faces of the high school kids I talked with in the afternoon, one of whom asked with with real sincerity how she could find her way into Whitman, how could she learn to read those poems? That seemed to me an honest and compelling question: how can I find a way to participate in what I don't know about yet, where is the door to this world you're pointing to?

On the way down, we stopped at a Czech bakery-coffee shop by the side of Highway 59 that was absolutely filled with dead animal presences -- rows of heads above the cooler case of beer and soda and Gatorade. Groups of older women, and men in cowboy hats, were sitting around drinking coffee from styrofoam cups surrounded by the stuffed corpses of deer. The strangest thing was that over the ATM, by the front door, was a mountain lion. Years ago, at the Desert Museum outside of Tucson, Paul and I walked up behind the mountain lion exhibit, to a small window in the back of a constructed cliff, where you could actually put your face to the one-way glass and look into the den of a couple of pumas. They were sleeping, in the heat of the day, sometimes a muscle flicking or a tail stirring; maybe they were dreaming. It was the most remarkable moment of intimacy, to be almost in the den, in their privacy and safety, in their cool cave. I wanted to write a poem about this but I've never been able to touch it. And here by the freeway, glass eyes, mouth in a fixed half-smile, screwed to the wall way up under the acoustic tiles. I thought I was in a Joy Williams story, in THE QUICK AND THE DEAD; I thought about Joy's sheer righteous anger and radical unsentimental compassion. 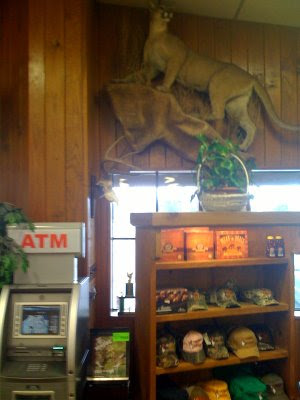 i love the labels on your posts! how often do joy williams, taxidermy and walt whitman get combined?