The Nature of Lost Things 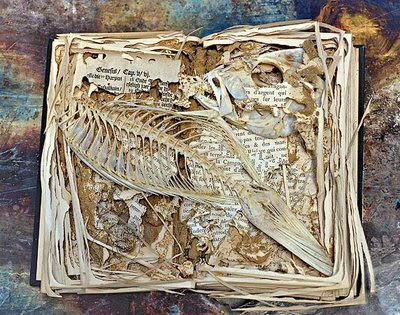 I've been reading the photographer Rosamond Purcell's book OWL'S HEAD: The Nature of Lost Things. It's a chronicle of her years of engagement with an astonishing junk dealer in Maine; "junk dealer" doesn't really seem the appropriate term, as what this fellow did was to build, over decades, an enormous site of cast-off and reclaimed things, sorted according to sometimes mysterious principles, and then simply allowed it all to decay. Purcell loves the damaged, the thing marred by use and by time, and she's especially interested in objects in the liminal state of being almost unrecognizable, so far gone in their entropic directions that you almost can't tell what they are, or were. When does a thing cease to be an object, what are the limits of an object's identity? Is a doll without arms or legs a doll?

I'm reading this just after moving out of my apartment in Houston, a process which always involves sorting through things, letting go of some stuff, packing up and sending on others. And though I've been moving all my life, it calls into question the value or ownership. Why do I need these books, where did I get this plate or bowl, and why am I carrying them onto the next house in my life. Maybe this is why Purcell's compelling book unsettles. Her clarity about this vast, outrageous collection makes me nervous.

Yesterday I went out to East Hampton, to close on our new place there. The seller hadn't finished moving out yet. He's been in the house for years and had a large, rather exotic accumulation. When I arrived for the walk-through you do before a closing, the entire front yard was covered with his stuff, in various states of dishevelment. And in truth I felt sorry for the guy, in his rather overwhelming situation, but somehow I was also right back in the world of Purcell's incredible listing of things that happen to objects, and my own weariness with moving and packing, and it's not really an exaggeration to say I felt a kind of vertiginous horror: stuff, stuff, free me of stuff!

From which no one can be quite freed, and of course I don't really want to be. Most of the time.

Here's a slideshow of Purcell's work.
Posted by Mark Doty at 6:54 PM

I agree with the unsettling feeling that this work leaves. There's some odd beauty in what's unsettling and ugly...in what is uncertain.

More of your work sold tonight! Three more books and it was snowing like mad. It's so easy.

I'm seriously interested in bringing you to Wichita, let me know if you get near the midwest, we aren't so backward as one might think.

Also, on line with your discussion of stuff and such... please check out James:

http://viewfromaboxcar.blogspot.com/
I think a dialogue with him would be worth your while.

stuff drives me crazy, and we've a ton of it, mostly jars and sprays like Marvel's Mystery Oil. what is that?
when it flooded here, we lost some stuff in the basement of our no-more house. but we didn't lose our Flow-bie. sort of a sad story, i know.

Such an unveiling of the decay and destruction that is always occurring in order to create new things, but that we are endlessly trying to stay ahead of.

This makes reminds me of a book, "The Tears of Things: Melancholy and Physical Objects," though it's about objects as art -- not in states of decay. Still, the power of the thing! Thanks for this.

thanks, Pam, what a title! I can't wait to find that book.

Here's another: "Evocative Objects: Things We Think With." It's a collection of essays edited by Sherry Turkle, who directs the MIT initiative on Technology and the Self. Different folks ruminating on a beloved object. I kind of have a thing about things - or at least thinking about things. Good reading!

Fascinating stuff. How ever did you hear of it?

A photo by Rosamond Purcell appears on the cover of my friend Kathleen Graber's book of poems, CORRESPONDENCE, one of her photos of decomposing objects -- beautiful and intricate in its ruination.