"Say goodbye to her, the Alexandria you are losing..." 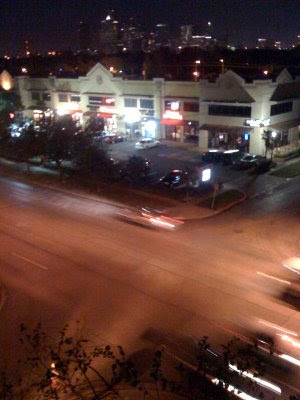 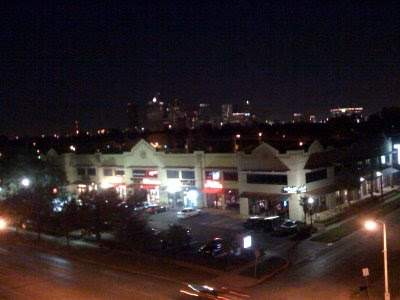 I've spent most of the day packing, and it's not like I've done that much physical labor, but for a while thia afternoon I was so weary I had to lie down. It wasn't til later, when I went up onto the roof deck at dusk to look at the lights and get some air, that I realized that what I was actually feeling was an underlying sadness. I took some pictures of the skyline and the traffic on Montrose below, thinking about the way this strange jumble of a city has been part of my life for ten years now. I'm ready to go, but there's also something poignant about moving on.

Later, after the gym, I went to a Vietnamese restaurant I like, and a Ukrainian waitress took my order. While I was dipping half-circles of dry translucent rice paper into a bowl of hot water and then rolling up herbs and lettuce and cucumbers and the most delicious fried onions, some guys went through the dining room carrying a huge Christmas tree, so big you couldn't see all of it at once as it passed horizontally through the doors. When I left, the staff were decorating the tree. A man and a woman in bad glam-rock costumes, with butterfly swirls painted on their faces, came in for dinner.In the parking lot, I stopped to listen to the loudspeaker from the gay bar across the street. "This is for you, James," the DJ said, "for your birthday, bitch." Then he proceeded to play a very funny, dirty parody of a popular ballad sung by an emotive black woman, so loud that it filled the whole parking lot, louder than the traffic going by:

Viet Nam, the Ukraine, Christmas, glam rock, the tacky old sweet and filthy world of old-school gay bars: all at once. Oh, and I got a fortune cookie with my dinner. Goodbye, Houston.
Posted by Mark Doty at 8:04 PM

What a way to go.

That and a little mothering--It's been such a whirlwind of stress and wonder in your world. Eat well, Sleep well, and wear a scarf drink Orange Juice and eat Chicken noodle soup just incase the crud is creeping...

Ah, sweet and funny. I'm feeling a little of that sadness to, the kind of sadness that's only possible when something better is on the way.

Here's a link to the song I think you were thinking of:

Hi Mark, I only just discovered your blog very recently - after hearing you read at Poetry International. Congratulations on your award and the rest of it - this is the post I'm choosing to come in on, because I just love it. Technicolor! It is hard to leave - but it will be wonderful to arrive.