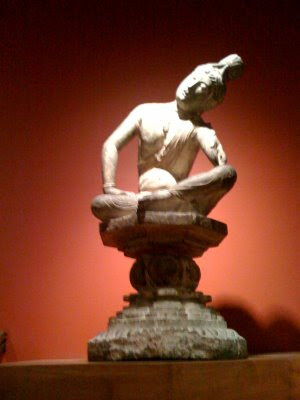 This Boddhisatva is one of the attendant spirits in a splendid gallery at the Art Institute of Chicago, and as we're getting ready to leave town this morning I'm thinking this figure represents exactly a position I'm longing for: it strikes just the right balance between the energetic and the restful; it's somehow contained and about to spring into action at once.

In the same room, an upright stone Buddha seems entirely still, and the weight of it makes it seem as if it's just falling more deeply into itself, a massive center of gravity anchoring everything around it. But in this figure, that tilt of the head and the angle of the arms makes the Boddhisatva (if that's indeed what he is -- maybe a guardian spirit?) seem turned outward, attentive to the world.

Attentive but entirely centered, the figure makes me think about the double meaning of the word "poised," as in "still, graceful" and as in "poised to" -- about to spring or leap or speak. It's this doubleness that makes this figure so magnetic. (Especially after attending a conference with thousands of writers.)
Posted by Mark Doty at 6:45 AM

Thank you for sharing this, plus the photo. I can see what you mean about being still yet ready to spring into action.

I think this what every artist should strive for, isn't it? To be centered and yet always alert, noting the world around them.

What a fascinating thought! I like that the statue looks alive, like he's holding this pose until we turn for a moment.

So glad to have found this blog!

I love your take on this.
I'm thinking now how a poem is balanced between energetic and restful, movement and stasis.

I see wonderment, too, and a bit of awe.
Thanks for posting the photo and for your wise words.

It is in a state of restful alertness that we can be most fully in the present, prepared but not fearful about whatever might come along.