More tales of the city 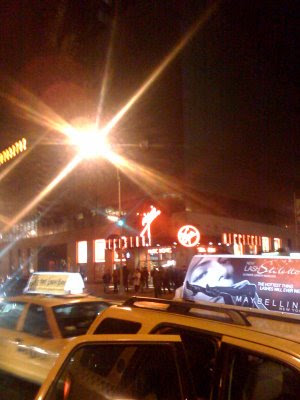 The neon's hard to read in this photo, but this is the facade of the Virgin Megastore, seen from across 14th St in Union Square; the store's closing down soon, another megalith falling away, which is maybe why the big V isn't working. so that the sign on the side reads "irgin." My friend Michael said he went in this store the other day, remembering back when he first went to huge music stores and liked discovering something new there, a feeling that couldn't be recaptured on this visit. It occurred to him as he left that going to a big music store was probably something he'd never do again. Not that it would be missed, exactly, but that it was something of marker in a life, when you notice something in the world changing. I've been thinking along those lines myself during these few days here, how clearly New York isn't the place I moved to at the beginning of 2001. Eight years isn't much in the life of the city, but how rapid the change seems in just that little while. Even in just this space. The Zen Palate on the east side of the square were we used to get takeout gone. The vast messy improvised memorials after 9/11, the days of people gathering in the square every evening. The hundreds of pairs of boots set out to mark the deaths of soldiers in Iraq (and that was thousands of deaths ago). My friend Marie at the die-in to protest the invasion of Baghdad, and how I'd planned to "die" myself but couldn't do it, not even as a gesture of protest. Some of the change seems beautiful: the booths and tents of the Green Market opening and folding up again, the procession of trucks of food and flowers, and the pet adoption fairs on the corners with the guarded or open-faced animals and their hopeful attendants. The guys with the big plastic jars you put money in for the homeless. That strange big bas relief sculpture on the south side of the square, which used to emit smoke or fog. The endlessly increasing numbers on that lit-up clock that stand for what?

No nostalgia here; it's the endlessly changing urban body. I go away for a while and the city does not miss me one bit, though in a day it lets me back inside again. Michael thinks we are probably better off without the Megastore, faded temple of possibility, monument to the idea that it was a good idea to have everything in one place. This might be the era for the microshop, the one-off, the smaller and more flexible project. What are we going to do with all those big old empty boxes?
Posted by Mark Doty at 9:10 PM

Remember Bradlees in Union Square? It was going out of business in--2001? The distance between Bradlees and Whole Foods. And what's coming next?

Bradlee's had disappeared for me into the fog of time.

Thanks for the great post. Love your blog. That sense of the world moving on as if we’d never been here can feel particularly unkind in NYC sometimes. It’s the seeming indifference of nature played out with all our man made stuff: buildings, businesses, fashions, fads. Nature (compared to human nature at least) can seem so detached. Sometimes it’s hard not to take these impersonal changes personally. We’re one part of nature that gets to feel things about all this change, and then we’re encouraged (mainly by suffering, attachment and the occasional bodhisattvas) to detach with insight and compassion.

FYI: I found this explanation of that endless clock you mentioned—
http://gothamist.com/2005/03/11/whats_the_deal_with_that_union_square_clock_thing.php

Thank you, John, that is so enlightening about the clock; I had no idea what the numbers meant, but it's still weird about the three numbers in the middle that are always moving so fast -- because we are hurrying so swiftly toward midnight, if you look closely enough? I guess bricks and mortar always have a sense of permanence about them, even though of course they mostly possess no such thing. It's funny how when you go back to the park the trees are mostly still there, where you saw them last, or maybe it's just that if you aren't looking closely the trees just seem pretty much the same? Whereas, you know, when Tasty Delite is gone,
that's hard to miss.

I am glad someone posted a link to an explanation of the clock. I was just debating what it might mean with a friend of mine outside the Virgin Store this weekend...

But what's the "magic wand" looking thing about?

I like the change and shedding of skin in NYC. I think of the Lorca poem and the image of the one drop of duck's blood underneath the subway. NYC is it's own being to me. Constantly regenerating itself, rebirth, sloughing off of cells.

OMG...is Zen Palate gone?
I have not lived in NYC since 1976,
but the husband & I used to visit every year for decades (last visit 2004) until we became to poor to even travel. Zen Palate was our headquarters for our visits & Union Square our center.
Jeeze... these are difficult times.
Love your work, love your blog. Dog Days is one of the most important books in my lifetime.
Wishing you the best...
S

The Virgin megastore had listening stations! It wasn't the first music store that had them but most didn't. Ah, yes, that was an internet ago.

That Virgin Megastore used to be a Mays store when I was a kid in this neighborhood -- and across the street was S. Klein on the Square -- where all the parents would shop for school clothes when the new fall year began...the Park had al ot more kids in it.....kids everywhere...and you actually had drinking fountains that worked...fresh cool water on a hot summer day.....and book stalls all over the place. You could buy a whole library of paperbacks in one day's stroll........but I love seeing how it's changed. Behind everything are the images of what was there, and they live quite comfortably in my mind, side by side.....