Skeins of light and legacy on the East End 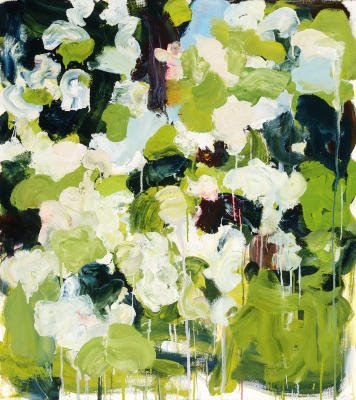 This morning we needed a couple of things from the hardware store in East Hampton, which is a little bigger than the closer one in Amagansett, so we drove into town and had breakfast, bought the necessary supplies, and then thought to stop by The Drawing Room, a gallery that had a show up by Robert Harms we'd read about in the Times. Harms spent the last year painting beside a pond in Southampton, and the reproduction in the review was alluringly full of water-light, and I liked that his work seemed in the line of Joan Mitchell, a painter I love.

The show was just beautiful -- vital, watery dramas of color and brushstroke that didn't so much represent the surface of things as enact the motions and layers of that surface. In the white, light-filled little rooms of the gallery, the work just sang.

And then Robert Harms himself appeared, who turned out to be a friend of our pal Eileen Myles, and as we got to talking we learned that it was Robert, a friend of the late Joe LeSueur's, who'd found on Joe's desk after his death the manuscript of a book of reminiscences about O'Hara and his poems. Joe hadn't felt confident enough about the book to publish it during his lifetime, but Robert loved it, and gave it to Jonathan Galassi, who edited the manuscript. And thus we got the best book about O'Hara I know, SOME DIGRESSIONS ON POEMS BY FRANK O'HARA. Its off-the-cuff, casual memories of who was doing what and sleeping with whom and what was going on while a particular poem was composed are wonderful; they give you the texture of the conversation and presence of the man himself.

A painting of Robert's from the Parish Musuem in Southampton called GREEN RAIN is above, and you can read about the show at The Drawing Room here.

There's something thrilling about these artistic legacies being so close at hand: O'Hara to LeSueur to Harms, and here is talking with us on a rainy Thursday morning, while the paintings glow around us.
Posted by Mark Doty at 10:23 AM

Extraordinary work; glad to have been introduced to him. Chance on a summer day -- the best way to connect to people who are already on their way to us. Great post. Thank you Mark.