What immortal hand or eye? 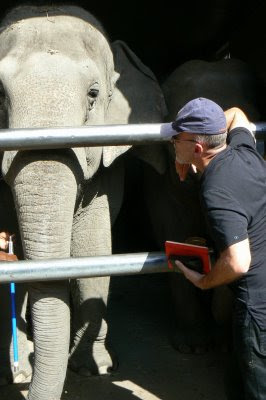 I'm in New Orleans today working on my zoo project. I toured the zoo with Brenda Walkenhorst, the education director. Brenda told me a great story about how she and her husband evacuated during Katrina with their fifteen animals -- dogs, cats, rats, chickens, guinea pigs, and probably some more I'm not remembering just now. And I thought Paul and I had trouble finding a motel in our dog-traveling days! We wandered around the zoo and looked at a hot island of flamingos. Four giraffes roaming around in a circle (they wanted their dinner) with a combination of grace and ungainliness that's entirely alien to human movement. A Louisiana black bear up to his neck in swamp-water, cooling down. It was so hot I wanted to get in there with him; it looked so inviting, to be swimming in dark water with that brilliant green algae on top.

And: tapirs. Two pure white alligators with blue eyes (hard not to think they were artificial) who live in indoor tanks because they'd perish of sunburn. Jaguars in repose, somehow both placid and tense at once. Curious and lively-faced river otters.

Earlier today I'd been reading Paul Mariani's biography of Gerard Manley Hopkins, and at the zoo I found myself thinking about the terrific felicity of his descriptive gift. Watching swallows in flight, he notes "the lisp of their wings." Studying carnations, he says they're "powdered with spankled red glister." Oak leaves are "platter-shaped stars." Each of these examples owes some of its sense of accuracy to its artfully built music: that "lisp" is a very precise way to evoke a certain kind of scissoring of wings; "spankled" and "glister" push against each other so pleasingly as to create a sonic equivalent or suggestion of the physicality of that particular red. He understands that what speech can do -- make music -- is a way that it approximates what it cannot: render the nuanced exactness of perception.

After the zoo closed, Carol, another education person, took me back behind the elephant exhibit to meet the two elephants, one in her forties and the other in her thirties, who've been together there for years. They were in their big cool barn, about to dine on hay and a pile of ginger plants; their handler asked them to step forward to see us. I fed them banana pieces -- first giving the piece to the marvelously articulated trunks and then putting one right into a great gray mouth. I stroked their massive foreheads with the odd thick hairs scattered here and there, looked into their eyes which are surrounded by a cluster of long, coarse lashes, splaying out like flower petals. I stood between them to be photographed, and one investigated my left shoe with her trunk; I could feel the very vital muscle of its aperture working my shoe leather, like a foot massage. How to describe them? Thoughtful, unhurried, something emotional in their presence -- I don't know if I mean that they themselves seem to be feeling, or that they provoke feeling in me, probably both.

And then we went into a cool, locked hallway, rather like a kennel -- and there, behind one of the barred doors, was a four hundred pound white Bengal tiger, of astonishing beauty, lying down with his huge front paws flat on the cool floor, and his open and curious gaze turned to us. He'd come inside to escape the heat; he seemed to like us, though when we began to talk about Blake and symmetry, and I recited a line or two of the poem, he stood up, turned around, and lay down again with his rump to us. Oh well.
Posted by Mark Doty at 7:46 PM

When I worked at the zoo I noticed
how some animals would fight to escape,
tearing and scratching at chain link or stone,
desperate to find freedom some way.
Others were perfectly happy
to be fed every day.

Thank you for quotes from Hopkins; they have velocity. Do you think your zoo impressions might make a book? I like their calm precision.

'How to describe them?'

I don't know if it helps by my experience of being in close contact to elephants brought to mind 'massive, eternal presence' in the sense that there is an ageless, outside-of-time quality to their slow moving presence.

Hi, Mim. I remember you from Harriet. Isn't the internet fun?

Everyone has an opinion. Sheesh.

.
I see God’s hand in amber clouds
and golden rays behind blue seas,
in black stripes on orange fur.
I see His plan in flowering trees,
in mockingbirds and honey bees,
in every desperate cur.

Call me crazy…well, they do,
but I see His thoughts in cobras, too.
I see His will in crocodiles,
in spider webs in morning dew.
They see God in human beings
and Satan in the wild,
but I see the Devil in you and me
and in every human child.
The roots of Poison Ivy
always grow new vines.

I see that mockingbird on the fence over there
just winked his eye at me.