A visit to the future 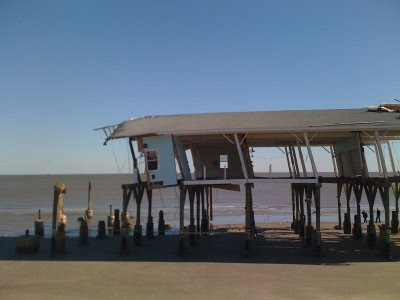 Walking through Galveston, it occurred to me later, was like being dead. It was as if a hundred years had passed, and we'd come back to revisit one of our old haunts. Everything had been destroyed, more or less; the buildings were still standing, but whatever had occupied them was gone, and either they were sitting derelict or the workers were busy working on the gutted interiors. Every surface seemed covered with dust. The parking meters didn't work. The workers didn't seem to register that we were there, which made me feel more ghostly, like we were just slipping through unseen. That's odd, for a ruined place to make one feel like a phantom -- as if I had been carried away by the storm myself. There were huge piles of debris here and there, and other places just the emptied buildings sitting waiting for something new to happen. The trees downtown were all leafless; either they perished from wind and salt water or they're still waiting, months after the storm, to make a comeback.

In a hundred years or two, will we all be walking unnoticed through the remnants of this world?

This photo was taken down by the sea wall, where things seem a bit more hopeful than they do on the Strand. By the water, there are souvenir shops open, and crab shacks, and people are coming out to have a look and pose in front of the disaster. This ruin was the Mermaid Pier. Now the elements (and the seagulls) move right through it. That blue rectangle on the left moves when the wind blows. If you look closely you can see some strings of light bulbs still festooned from the eaves; the walls are gone but the lights are still there.
Posted by Mark Doty at 11:30 AM

What an interesting sense of displacement. Not like Pompeii or some other ruins abandoned by the living . . . but one in which the living are trying to reclaim their lives from the ruins. I wonder if any of the victims/citizens from Galveston's greatest demolition by hurricane in 1900 were wandering the premises, too.

Peter, I think you'd be interested in this link: ghost stories of the Balinese room. I would have incorporated it as part of my post if I'd read it last night.

Ghost Stories of the Balinese Room.

after the flood in 1997 where i live, you could taste the air.

the ruins after a natural disaster are unbelievable yet you can't argue them away when you see them. maybe that's what makes them feel so much like death.