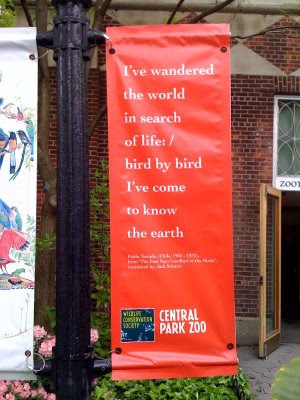 Yesterday I went to the Central Park Zoo for the first time. I'd never been because it's in the city where I live, and you're always more likely to see the sights in places you don't actually inhabit every day. And, although there's little I like better than looking at animals, I share some common prejudices about zoos: that they're for children, and that they're unhappy places of confinement for animals.

Given that the Central Park Zoo is run by the Wildlife Conservation Society, I should have known better. They're one of the premier forces in the world for the protection of species, and of course they'd make a place that honored bountiful life. The Zoo is small,but it has a large spirit. There are two magnificent polar bears, in a big open-to-the-skies habitat with enormous stones, and a waterfall, and a deep pool to swim in. They were lying on their backs, sunning their bellies and scratching. There's a harbor seal who was rescued in Maine a few years back who can't be released back into the wild because his vision is impaired; he swims in apparent delight, as do the sealions who have a circular pool around a fountain. There's a rainforest biome where the birds fly around from branch to higher branch, and seem mostly quite interested in people; they land on a nearby perch and eye you inquisitively. It's a delight.

And I like the way poetry's integrated here. I'd seen photos of the installations of pieces of poems in the zoo (see previous post on The Language of Conservation), but seen in situ they do subtle and intriguing work, shaping the experience. I especially liked the banners that were both inside the zoo and outside, in the surrounding Park.
One's above, with a great Neruda quote. Another bore this wonderful Hass translation of Basho: "Year after year/ on the monkey's face/ a monkey face."

But it wouldn't be a real experience of animal life without a note of disconnection or strangeness. In the penguin exhibit, the birds (who hardly seem like birds, but something all their own) swim and dive, and you can watch them both underwater or strolling around on the stony shore. The rocks mount up several layers high, and behind them there's a sapphire field of artificial sky. One penguin had climbed up as high as they could go. He was standing, with his back to the teeming crowd of his peers, and he was fixed in position, studying the false heavens. He didn't move all the time I was there. He seemed like that unforgettable penguin in Werner Herzog's Scenes from the End of the World who wanders away from the tribe, heading firmly away from the sea, from food and company. The penguin in Herzog's film will walk till he dies. The penguin in the zoo -- you can see him below, looking skyward -- can't go anywhere, but he seems to have left anyway. Is it too much to think of him as the poet, the one who can't ever quite remain in the group? Either inwardly or outwardly -- and here I can't help but think of Deborah Digges and of Craig Arnold.

Anyway, the zoo was more real because someone there had stepped apart alone. And maybe he'll just turn around in a while, weary of his study, and come back down to the water with the others. Probably he will. 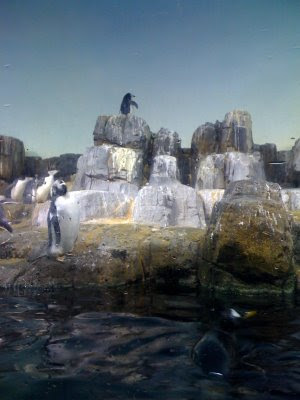 not too much to think of that lone penguin as a poet. my bearded collie is a poet of the deep imagist school.

Your heart is with the penguin, the solitary. Is that a seal in the black water?

Beautiful post, Mark. I didn't know there was a zoo in Central Park. Guess I am always rushing through or by the park, but I'll make it a point to visit now that I've got some sense from your descriptions of the zoo's delights. Thanks

How lovely to read such a positive post about the zoo and animals. Really --

youre gorgeous mark and i envy your abilities, but i think it's encounters at the end of the world