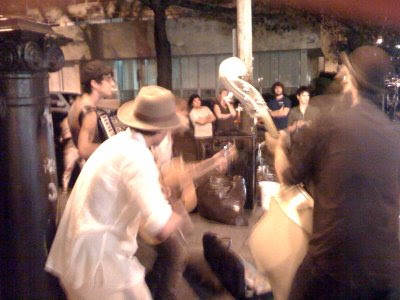 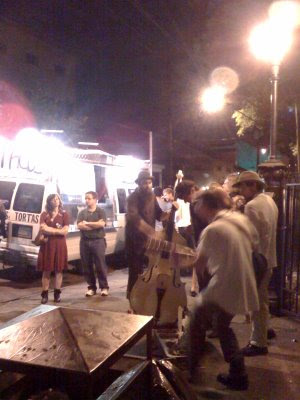 I came upon this band playing on a streetcorner tonight. An accordion, a violin, a gleaming white bass played by a tall boy with a voluptuous beard, and a guitar; a mix of gypsy, Klezmer, Stephane Grapelli and maybe a little rockabilly thrown in. It was heavenly. They were playing beside a Honduran taco stand, a trailer that served up a mean vegetarian burrito with a green sauce hot as the music; there was a lot of people gathered around, both eating pork-and-pineapple tacos and taking in the music. It seemed like an occasion of delight all around. New Orleans is one of the holy cities of the imagination, and somehow no amount of disaster, tourism, and governmental ineptitude seems to have been able to destroy that. Water, maybe, in a while, but I think there have to be some fiercely protective spirits here too.
Posted by Mark Doty at 12:11 AM

Laissez les bon temps rouler! Delight in the streets, so unlike the northeast, where I Iive.

I love your description of New Orleans as "one of the holy cities of the imagination." It is truly a place inhabited by spirits, magic, unparalleled music and cuisine that can drive me to my knees in gratitude.

Incidentally, the taco stands have all sprung up post-Katrina, as Latinos have flooded (so-to-speak) the area to do a lot of the cleanup and rebuilding work.

I'll be there in two weeks. Can't wait. NOLA is one of my spiritual homes.

The phrase "one of the holy cities of the imagination" is quite possibly one of the best descriptions of New Orleans I have heard. There is something about the city that cannot ever be duplicated. Some indescribable feeling seems to linger over you any time you are there.

I had a girlfriend once who was from NO. Even the way she talked was sexy. And her dirty rice!

I don't think I can take credit for the phrase "holy city of the imagination" -- though I also can't remember where I read it someplace, long ago. Not in reference to New Orleans but someplace else. I'm wondering if it's somewhere in Lynda Hull's work? Or maybe in Ginsberg?

OK, well, "holy city of the imagination" comes to mind first from the most beautiful blurb I ever received, which is the one Phil Levine wrote for MY ALEXANDRIA. But it also shows up in critical writing about Yeats and Byzantium, and doubtless in plenty of other places, too... so maybe it doesn't have a locatable origin?

Well, even though it originates from somewhere else (collective imagination, perhaps?), it is the first time I have heard it used to describe New Orleans.

Did you overall enjoy your trip to the city? When were you last in town?