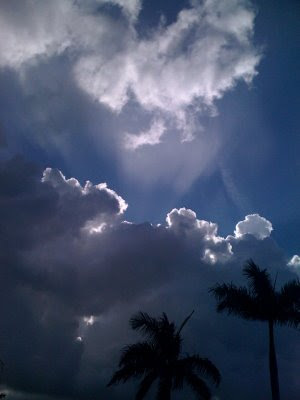 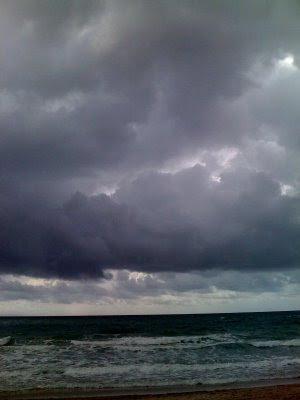 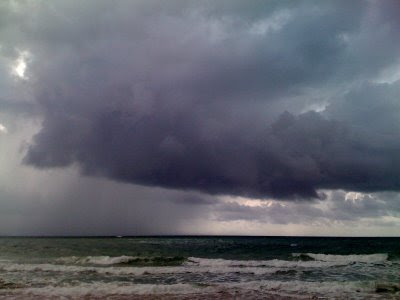 We're just back in the city this evening from Ft. Lauderdale, where the remnants of what could have become tropical storm Ana were racing in from the Bahamas, making this glorious drama up above the low-slung, not-really-so-glorious landscape of Broward County. Paul's mother's name -- as you already know if you're a reader of his blog -- was Anne, and indeed this seemed like her weather, a swirling atmospheric turbulence to mark her passage from the earth-plane to whatever's next. (Which is maybe also the earth-plane, but in another form, experienced entirely differently?) There was a viewing, and a funeral mass; the best of it all were the words Paul spoke at the ceremony, a precise and loving tribute, which felt suffused with regard for his mother (that is perhaps the best of love: the deepest regarding) because it tried so hard to see her, and to name who she'd been to him and to her family. It's an odd paradox that the rites of burial are so full of attempts at consolation and spiritual comfort when in fact what people really and truly crave is to see, name, and consider the person who's gone, to tell stories about her, to hold that character up to the light of our collective attention. That is the uplifting part, somehow. So Paul's words -- which described Anne's love for the shore, her delight in going for a ride, getting out to see what the world was made of, the huge energy she gave to supporting her children's passions (even when they were, um, a little dotty) -- those loomed like the largest thing in the room, in the modern Catholic chapel with its artfully askew stained glass. That, for me, was when things turned toward lightness.

Later, I was by myself in the motel room while the Lisickys had gathered elsewhere. I was meditating and letting down the tensions of the day when I imagined Anne coming into the room and saying, Well, I'm just going to sit down and rest on this bed, this being dead has worn me out, I've been everywhere. And I said, Have you been busy? What's it like? And she said, Like nothing you can imagine.
Posted by Mark Doty at 8:30 PM

Mark
what a fine tribute to a wonderful spouse's gifts
thanks also for the incredible photographs- particularly the first one
you're both in my thoughts are you work through the 'days after' what can only have been intense and slightly sureal.

what a beautiful description. such magnificent photos-i can only imagine how it felt to see that sky.

my best to both of you.