Could it be true we live on earth? 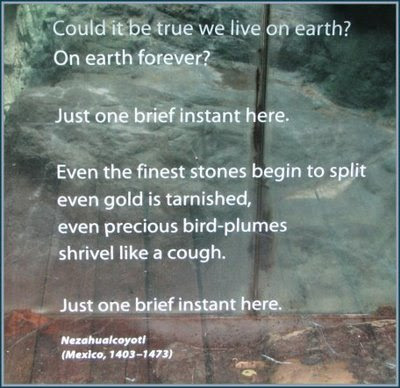 Over the next three years, I'll be working with the Audubon Zoo in New Orleans on a project sponsored by Poets' House. We'll be placing poems in installations around the zoo, as a way of centering attention on the relationship between human beings and the rest of the world. There have been some fascinating studies on how such a project worked at the Central Park Zoo -- subtly changing perceptions, informing the experience people reported there, shaping their time with animals. The research demonstrates that people who encountered poetry as part of their zoo experience left with a feeling that they could do something about the crises facing the earth now. They felt that this wasn't a distant problem, remote from their own experience; rather they seemed to experience a greater sense of themselves as participants in the life of the world. What they did mattered.

Above is a photo of one of the poems installed in the Park, an Aztec text. I haven't seen this on the site yet, but it looks to be printed on glass and placed between the viewer and moving water.

The project's called The Language of Conservation, and five poets will be working with five zoos around the country: Alison Deming in Jacksonville, Pattiann Rogers in Milwaukee, Joe Bruchac in Little Rock, Sandra Alcosser in Brookfield, Illinois, and yours truly in the troubled and dreamy cradle of American music. There's a lot to do but it's pretty exhilarating.

So I've spent the last two days in a planning gathering, and whenever my attention flagged (the inevitable result of the language of meetings, reports, evaluation, and so on) it was restored by poems, and by astonishing images of animals. One of these latter was a video from Jacksonville, which I'll post here; a strange and compelling bit of intimacy. Who'd ever think you'd get to watch the birth of a jaguar?

My other partner in this project is the New Orleans Public Library, in particular the lively and committed people at the Latter Library. We're hoping that people who encounter the poems in the Zoo will want to go deeper, and so the library will be offering readings, displays, posters, who knows what... more to come.
Posted by Mark Doty at 7:27 AM

This is a great idea. I spent all of last semester in New Orleans. I never did get a chance to go to the zoo, but poetry is alive and flourishing in the city. It's full of too much promise, so many broken dreams, and fiery spirits not to be. Keep us updated on your progress!

Just a thought and a suggestion: I doubt Nezahualcoyotl wrote this in English. Maybe in your work with the Zoo you could make sure translators are identified. It is good to have people realize that the majority of written work in the world is not in English, and if it is read in English someone was responsible for bringing it into the language. I think I am preaching to the choir, but just to be sure, I thought I would leave the comment.

Thanks for your blog and your work.

I agree with you j. and it may be the case that the translator is identified elsewhere in the zoo; I'm going to see this in situ soon and I'll see.

I already found a beautiful Inuit
text, in English, concerning the difficulty of finding words for animals -- and no translator's name anywhere in sight. Sigh.

This is really neat to read about. The power of words is never to be underestimated. I'm glad you are involved in this!

This is such a great project for you...one of the worl's great poets & an animal lover!