Last night Adrienne Rich read at Rutgers. We had a superb day, with my lucky undergrads meeting with her in the afternoon, and then a relaxed and convivial dinner with a number of Rutgers poets and with Adrienne's old colleagues at Douglas College, which is the residential women's college of Rutgers, and a long-established center of feminist studies and literature. Adrienne has a warm, unguarded character; the time with her was a delight to everyone around. Here's the introduction I gave, in a very crowded hall, just before her reading:


Some artists, it seems, can’t help but be pathmakers; they open possibilities for other makers, and possibilities for their culture. Muriel Ruykeser, who opened new directions for American poetry that Adrienne Rich would further explore, wrote the following description of the situation of our poetry in 1949:

"American poetry has been part of a culture in conflict. ... We are a people tending toward democracy at the level of hope; at another level, the economy of the nation, the empire of business within the republic, both include in their basic premise the idea of perpetual warfare."

Sixty years later, those words seem more true than ever, and it seems no accident that those same sixty years mark the career – thus far – of the remarkable poet who reads for us tonight, one of contemporary American literature’s essential voices. Across 19 books of poems and four volumes of essays, Adrienne Rich has given body to a restless intellect motivated by an unshakeable compassion; she is out to get to the root of inequity, of the abuse of power; she is out, as Ruykeser suggested, to make American democracy a real thing, and to dismantle, in her own language, the sources of perpetual war.

So much has been said about Adrienne’s work, and I know that many of you have been reading and thinking about her poetry and her essays in preparation for this evening. So I want to say just two things about Adrienne. First, that she is a former professor of English here at Douglas College, and it is a delight to welcome her back; as a new professor here, her presence here reminds me that I stand in a serious tradition indeed. Second, I want to tell you what I perhaps what I admire most about Adrienne: her profound restlessness. I mean this in two ways. She has never been satisfied, as far as I can tell, in her quest for justice; she has never stopped asking further, looking deeper. As W. S. Merwin put it, “All her life she has been in love with the hope of telling utter truth…” That love, and her empathy with those in this country and in the world who are not in positions of power have not, I believe, allowed her respite; she has never set down that work. And that moral restlessness has been matched by an aesthetic one, as Rich has continued to reinvent her forms. Listen to this stanza from her much-anthologized classic, Aunt Jennifer’s Tigers:

That poem was published in 1951, in the poet’s first book. And this stanza is from a new poem, “Tonight No Poetry Will Serve,” just published in the Best American Poetry 2008. It’s a poem that wants to think about extraordinary rendition, how syntax is broken apart as the torturer and the prison guard remove meaning from the world:


I love knowing that these two stanzas came from the same hand. They represent points along on a long arc of invention, form constantly seeking the words that might serve her work of witness and of change – a work that continues to engage and to enlarge our time. Please welcome Adrienne Rich.
Posted by Mark Doty at 9:23 AM 1 comment:

A Gate at the Stairs

"Often we didn't talk at all. His arms were soft and strong. His penis was as small and satiny as a trumpet mushroom in Easter basket grass. His mouth slurped carefully as if every part of me were an oyster, his, which made me feel I loved him. He would pull away and look at me happily from above. 'You have the long, pettable nose of a horse,' he said, 'and a horse's dark, sweet eyes.' And I thought of all the horses I had seen and how they always seemed to be trying to get their eyes to focus and work together. Their eyes were beautiful but shy and lost, and since they were on opposite sides of their heads like a fish's, one of them would sometimes rear up in skepticism and fear and just take a hard look at you. I felt nothing like a horse, whose instincts I knew were to run and run. I had mostly in life tried to stand still like a glob of coral so as not to be spotted by sharks. But now I had crawled out onto land and was somehow already a horse."
Posted by Mark Doty at 8:32 PM 1 comment:

from the Crescent City

In the window of a pharmacy museum in the French Quarter, these medicines: what would happen if you took a dose? 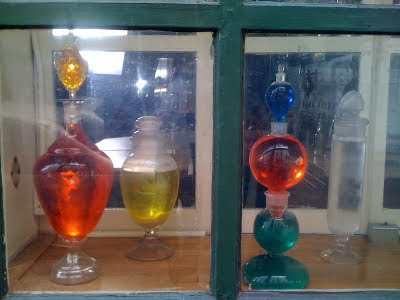 And then, in the sky early this evening after the lightest of rain, other medicine: 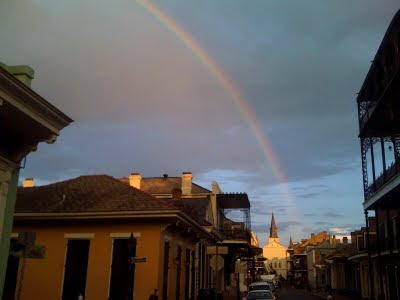 Today we made our first visit to Madoo, the remarkable Sagaponack garden of the painter Robert Dash. He's been working on it since 1967, and its has the quality of a self-made paradise that I love best in made spaces -- that sense of one person eccentrically re-inventing tradition, making a private world. Though this dreamed spaec also opens out into history, and into the social space, since Dash is quite happy to welcome people in, on Wednesdays and Saturdays, from May to October.

The garden feels enormous, because it's a space of forking and divergent paths, because there are wide and open rooms and tiny and enclosed ones, and because you can never see it all at once. It's a green labyrinth, and it echoes the Garden of the Moon in Tucson (a kind of outdoor outsider art folly I described in FIREBIRD), and the Orange Show in Houston (there's a photo album of that on my Facebook page). But it also draws upon ancient gardens with its quincunx beds, and Rennaissance perspective, and Victorian Orientalism and love of the tropic and rare. It's a grand, unlikely, seamless synthesis, and somehow it doesn't look like anything else.

It's such a gift, to walk out of the daily world and into the alternate space of the enclosed garden, the visible, apprehensible artifact of a singular forty-year dream. I don't think it can be captured in photographs -- it's too much a surround for all the senses -- but you can get a little sense of it here.
Posted by Mark Doty at 4:50 PM 2 comments:

The wind of the new

I've felt a bit overwhelmed by the start of school, so no post here for a few days. In a household with two teachers, both starting new jobs, there's a definite mood of disruption swirling around in early September, and it's matched tonight by the wind in the Springs, which is tossing the garden wildly. Paul's still in the city, teaching tonight in Newark, and I've come out here by myself to sit still, for what seems the first time in two weeks, and listen to the wind. I'm thinking about how I love the new, and seek it out, to keep things moving, and yet the new -- especially this much new -- is a source of stress too. Even when it's good. The body isn't really pleased with the process of finding its way in a new space, not knowing where the stairways lead. The spirit's excited by the looks on the students' face when they're thinking about a poem,
or how their shy surfaces fall away as they get excited. The body really wants to sleep, these two weeks. The spirit wants to plan and anticipate. The wind outside feels like a wind inside. Tomorrow the forecast is for rain, and I hope it does: a day to stay in,
sort, and attend would be just the ticket.
Posted by Mark Doty at 4:49 PM 3 comments:

First week of school, and I've been thinking how, for more-or-less fifty years, the school calendar's provided a structure to my year, that first week of September (give or take a bit) marking a new start, a re-energizing, a setting out. I took a few years off, in my twenties, doing other things, but for nearly all my life September's been the time of fresh beginnings. By now it feels like the academic calendar inheres in the structure of time itself; first shift in the weather, I want some new shoes, a new bag to carry my books and papers to school. As a kid in Memphis and Tucson, I bought big fat-lined pads of paper; I liked that they were called "tablets" because it echoed the slabs of Babylonian clay in my favorite archaeology book. This semester I have a new laptop, courtesy of Rutgers, but the pleasure is essentially the same: something fresh and pretty much empty to write on.
Posted by Mark Doty at 3:22 PM 4 comments: