Here's a poem from a terrific book, torch song tango choir by Julie Sophia Paegle, soon to be published by the University of Arizona Press. I love (no surprise!) the descriptive richness of this poem, with its very exact attention to the look and shape and behavior of mussels. But I'm also delighted by the poem's daring in ventriquizing these creatures: of course they'd speak, if they could, in the first person plural. I like Paegle's formal acuity, too; somehow these syllabic stanzas feel themselves like bunched tight mussels. And it's a delight the way the last stanza's surprising image takes us to the winglike form of a hinged mollusc shell -- wings made blue-black, here, by their distance from the heat of the divine, or by the darkening smoke of hellfire.


Blue inside
obsidian, blue of compression,
blue of the fleck

and of flash-
cooled glass. We anchor
volcanic, and fast.

We embrace
and make changeful our
beach. We bury.

Between, we
breach -- our numbers our
read -- but do

not be fooled
by the forfeit of blue,
that sad shadow mim-

icry shift-
ing on waves, or within.
Not slate, nor

azure, we
are devotion to tidal
recession,

we turn to the
backing away of the ocean
as cicadas

turn to their
seventeenth year, as delphinia
gravely follow

the sun, not
unlike some seraphim long
after faltering.
Posted by Mark Doty at 9:33 AM 6 comments:

That suspense of punctuation...

In light of my Dickinson post of the other day, I thought I'd add here a remarkable, useful passage from an essay by Heather McHugh called "What Dickinson Makes a Dash For," from her book BROKEN ENGLISH. I'm not sure anyone ever said this better.

"Eudora Welty says the writer's work is to detect the pattern beneath the given, a shape at once lyrical and mysterious and felt, which 'is the form of the work...underway as you write and as your read.' (Writer and reader both do it, intuit the shape in the act, and their acts are by no means opposed.) The mysteries of meaning (at-once-still-and-moving, at-once-part-and-whole, at-once-read-and-written) obtain in literary as in spiritual realms. They resist logical codification because they sense, inside all diction, contradiction.

It is not the definable (delimiitable) finally, that interests Dickinson; she is drawn precisely to that uneasier thing, what can't be said. The relative exhaustibility of a literary construction is one measure of its inadequacy to this truth; and Dickinson's sentences and lines often seem designed (in judicious ellipses, elisions, contractions, puns and dashes) to afford the greatest number of simultaneous and yet mutually resistant readings. Where a lesser writer might try to comprehend the world by adding more and more words to his portrait of it, Dickinson allows for it, by framing in opposites or absents, directing us to what is irresoluble or unsaid, Where the addition of a word would subtract even one of the cohabitant readings in a text, she leaves the sense unsteady and the word unadded, What critics sometimes lament as cryptic or obscure in her work proceeds, I think from this characteristic reticence - a luxurious reticence, a reticence which sprouts and branches meaning in many directions, the way more exhaustive (less ambiguous) texts cannnot... Her richest work is precisely what critics since Higginson have called 'elusive,' and its signature is the sign of the dash -- that suspense of punctuation, that undecidabiity, which is not an indecision."
Posted by Mark Doty at 2:43 PM 4 comments:

Labels: It is the definabl 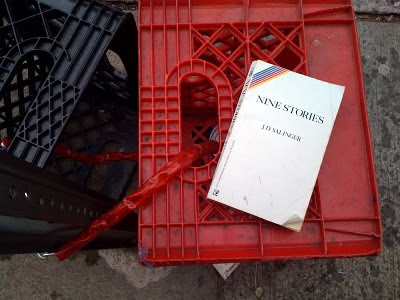 As you might be able to tell from the dearth of posts here of late, I've been absorbed in the new semester -- as well as having my attention turned to a couple of writing projects whose deadlines seemed to come looming up out nowhere, though of course I'd only been pretending that I still had time to work on them. Those are finished now, but I find myself more deeply drawn into the seminar I'm team-teaching with my colleague Meredith McGill. Because we're reading Dickinson, I've been thinking about the remarkable powers of wrenched or unexpected syntax, and the ways in which meaning is disrupted, complicated, and made multiple by the sheer power of ordering sentences.


The Love a Life can show Below
Is but a filament, I know,
Of that diviner thing
That faints upon the face of Noon
And smites the Tinder in the Sun --
And hinders Gabriel's Wing --

The first three lines of the poem might open many a piece of Victorian verse, with their comfortable assertion that earthly evidence manifests some portion of divine love. But the examples Dickinson chooses to show use the power of that over-arching spirit are peculiar ones indeed, if love darkens noon, smites the sun's own fuel, or halts the wing of an archangel, it's a powerful and disruptive force indeed.

The stanza that follows grows even more emotionally ambiguous. That filament of the divine is what provokes us in music, and what may, in the middle of a summer day, bring an unnameable pain; that filament of love may be what troubles and frightens in the medicinal color of a sunset. Divine love seems here to do anything but comfort;
the promise of the larger life discomfits, unsettles, wounds.

And this leads to the remarkable final stanza. Could there be another nineteenth century poem in which 12 verbs appear in 4 lines? How wildly modern this stanza seems, these verbs flung upon the page, each set out by attendant dashes, making a list full of opposites, a list that "hints and sways" as Dickinson says music does. What's above us, what the world larger than the visible one is as appalling as it is enchanting, as condemning of us (it "convicts") as it is endowing. Has anyone ever written such a bristling, contradictory, gorgeous list of verbs? The poem seems to explode, syntactically, in this final stanza, as if what Dickinson has to say about the world behind the world is so overwhelming, has placed such pressure on her speaking voice that she's become a stammering speaker, seized by this multiplicity of verbs.

And what to make of that final gesture? "Flings in Paradise" refuses any singular sense. If we take "flings" as another in that chain of verbs, then "fling" is an action performed by that filament of divine love that we csn apprehend on earth. Does it toss Paradise into our awareness, into the mix of actions that the other verbs have set in motion? Or do we take "flings" as a way the filament is moving, swaying as it does in music, a glimmering thread of the other world? Or is to "fling in" a gesture of relinquishment; like flinging one's sword to the ground, so that here Paradise is being tossed away, abandoned? The phrase seems to exist just beyond the edge of sense, forever floating in a zone of ambiguity the poem's created through the agency of Dickinson's daring construction of the sentence. If they should even be called sentences anymore, these deceptive and shimmering constructions of speech moving down the page.
Posted by Mark Doty at 2:52 PM 3 comments: