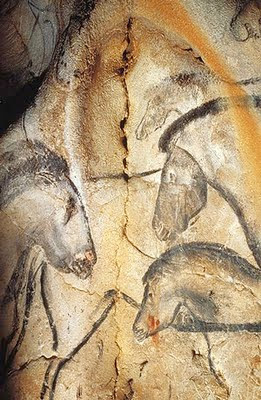 Saturday in Sag Harbor Paul and I saw Werner Herzog's new film about the ancient paintings in the Chauvet Cave, in the south of France. The paintings themselves are riveting and fresh; somehow they seem both haunting and surprisingly stylish-- as if they were sophisticated mid-twentieth century representations of animals instead of 30,000 year old paintings on the walls of a deep, long-sealed cavern. They are the oldest paintings in the world, and they represent only animals -- horses, bison, mammoths, antelope -- with the exception of one partial human female body.

It's too bad the movie isn't better. It feels like Herzog never figured out quite what to do with these images, besides point the camera at them and let us marvel along with him. That's sufficient for a while, but the nature of film is motion, and the nature of ekphrasis is transformation. It's never enough for one work of art to simply present another; what we require from poetry or lyric prose or film based in a work of art is a kind of active engagement which places that work in a new context, gets inside it, turns it inside out, somehow involves us in the process of knowing. We want to be involved with someone else's coming to terms; we want the work of art about the work of art to do something we couldn't do by ourselves.

And that's the trouble, finally, with the movie --you could have just as rich an experience looking at slides of the paintings in a darkened room, and there are a great many questions about the work that Herzog doesn't ask. Why are there only animals here ? What were the paintings for? Were they made to be seen, as a communal experience, or were they made by a solitary artist going down into the dark and working alone? Were they acts of art or acts of magic or of both? Do the grace and wit and power of these paintings have something to say about the notion of progress or development? And should we say that "we" made these, in our earliest history, or are the makers of this art so far from us as not to be part of a "we" at all; are they entirely other?

Of course these questions aren't answerable; it doesn't seem there's very much we can know about these pictures. But they seem endlessly provocative, and they trouble the mind like some lost part of our own memory.

Now that it's been a couple of days, I've mostly forgotten my frustration with the film, and what lingers is the memory of those images, especially the four horses lined up one behind the other, with their open mouths and wide eyes. Paul thinks that some art is made to be satsifying in the moment, and some made to resonate in memory, and that these different modes of making represent different styles and values. I didn't like Cave of Forgotten Dreams, but I won't forget it. You can look up Goggle images of "Chauvet Cave," and you'll see why.
Posted by Mark Doty at 6:02 PM 8 comments:

Fame and Notoriety in Little Rock

Thursday morning, a new experience. First leg of a day's journey to Little Rock, Arkansas. I'd made it, a little groggily, from home to Penn Station to New Jersey Transit to the AirTrain. I checked in at Terminal B and found my way to my concourse. I waited in a short security line holding my boarding pass and my driver's license. When I got to the front of the line, I handed the youngish, open-faced woman with dark red hair the required stuff. She said, "Mark Doty the poet?"

I said, "How did you know that?" and she replied, "I'm a huge fan, it's an honor," and waved me on. Now I've had readers say hello in restaurants and on the street, and occasionally I discover that someone who seems to be cruising me is actually an excited poetry reader. But the TSA? I dislike the entire system of surveillance, and I worry about how easily we've said yes to whatever we're told needs to be done for our protection. Sometimes it seems like the TSA exists simply in order to keep us alarmed, so we'll cede power to the state. But I have to say this did put the whole thing in a brighter light.

Before you think I'm just basking in the light of readership, here's part two of the story. That evening I was welcomed to Little Rock by my warm and lively hosts at the library, who brought me to the nicely-appointed room where i'd be reading. There were a few early audience members already there, and one or two looked up eagerly when we came in. A man asked me to sign a book; as I was walking past the front row to go fetch a pen, a woman greeted me and said she'd seen my face on the current issue of APR. "There was your mug, right on the cover," she said. And then, "I like some of those new poems, and some, of course, I do not."

I didn't question her about this, though I might have if I'd really wanted to have the conversation. It was the "of course" that did it. A couple of the new poems have to do with substance abuse and recovery. There is no explicit reason to assume that the first person speaker in the poems is me; after all one of the poems in this same group of new pieces is spoken by a baby mammoth who's been dead for forty thousand years. But people assume that "I" means "I", and there's a certain degree of truth to it. Whether an experience is literally ours or not, we make it so, finding in it a way for something in ourselves to be spoken that might not otherwise be articulated. There's a poem in Anne Sexton's second book, an elegy for her brother who died in the Korean War. It's not her best poem, but it's a moving one, and the reader who's interested enough to dig for biographical information will discover that Sexton never had a brother. The poem's a fiction, but one that was clearly necessary for getting at some emotional truth.

What difference does it make, the relationship between the poem and the biography of the poet? I'll be the first to say that I'm terrifically interested in poets' lives, but a poem is not a report on an experience. A poem can't really be "about" drug use or recovery; it has to create an experience in language, and then to reach inside that language in the direction of making meaning. If a poem merely tells us a story -- well, is it a poem at all?

In truth I don't care what the reader in Little Rock thinks about my life or what she assumes about me. Are those poems autobiographical? I don't believe in the question. I'm not trying to be coy, it's just that I think that making such assumptions about anyone's work is not a helpful way of reading. What keeps bothering me is that "of course." Is it an automatic response, to dislike a poem that talks about what it's like to experience the unsustainable ecstatic produced by getting high? Or a poem that names the commonality of the pain of people in rehab? That "of course" posits a stable set of middle-class values, shared by readers, that the poet had better be aware of. And is that what we want poetry to do, reinforce our agreed upon standards, shore up the moral principles of enlightened readers? Ugh. If that's the project, I'm not playing.

And so, fame in Newark is balanced by being notorious in Little Rock. I'm okay with it.
Posted by Mark Doty at 3:32 PM 11 comments: