A garden in The Springs 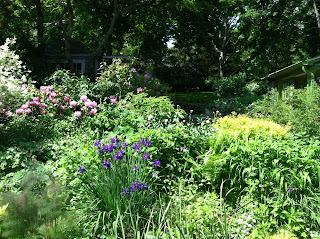 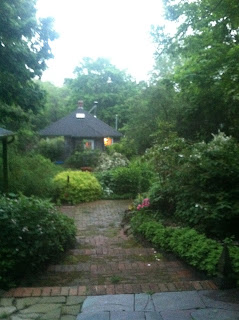 Two images from my garden in The Springs, one on a warm afternoon near the end of May, the other a rainy morning around the same time. This year, more than ever, the place feels full of mystery to me, invested with a depth I couldn't sense so clearly in the past. I think it's in part that I've changed and added enough now to the garden as I found it that it's begun to feel truly mine; in part it's that I've had Alexander's very real involvement and interest in the place to motivate me. And in part it's the gift of this strange season -- everything two weeks ahead of where it would usually be, and so much rain in May -- after not a drop fell in April -- making everything burgeon. Perhaps a perverse season, but splendor has to be taken where you find it.

I'm writing from the city, here from last night till just tomorrow morning for a few necessary appointments. I have loved New York for years, and I doubt my passion for it is going anywhere, but I'm struck now by how abrasive it feels to come back, after my days out east. The density of bodies, the proximity of concrete and metal to my body, the astonishing level of noise, the thrumming fabric of interaction -- all too much. It's a physical process of adjustment, coming back here, being entered and to some degree re-arranged by the city.

Tonight we walked on the Highline, truly one of the best urban spaces I know. People feel happy to be there, surprised and pleased by aspects of the city they've never seen, New York elevated (literally!) toward its best self. The gardens are just the right combination of simple and lush, the spaces shrink and expand, grow darker and lighter as you move, and the skyline opens in unexpected ways with each movement forward. A new angle on the Hudson, the last sun blazing over the rise on the other side, some pattern of street or unseen building suddenly visible, revealing a handsome shape, or color, or the way it talks to the scene around it. It's a delight.

Though in truth, I'm also thinking about tomorrow, when, as Stanley Kunitz said in  stunning poem set in his garden, "another day begins for me,/ as it does each day..." The peonies are open, and the plume poppies setting buds, and the Joe Pye weed is four feet tall already, which makes me wonder how far it will rise in September. I have the sense this year -- never so firmly before -- that my writing resides somehow in the garden, or rather originates there, that it wells up. My work's to attend, to allow myself to be permeated by the energies dwelling there. It's a gift, the license that is granted to the poet to speak in figures, to thar the underlife of the garden rises in a wave which breaks across the door of my studio, and enables the poem to begin -- and trust that if you don't follow my drift, you at least are unlikely to think me entirely out of my mind.
Posted by Mark Doty at 7:56 PM 1 comment:

About Darius, and the power of reading and writing

Here's one of the most delightful things that's happened to me this year, and a testament to what reading and writing do in our lives. My gratitude to Darius for helping me remember that.
http://www.schoollibraryjournal.com/slj/home/894644-312/wv_fifth_grader_donates_10000.html.csp
Posted by Mark Doty at 7:24 AM 1 comment: