Yesterday we heard that the first balls of tar had appeared on the shore of Key West, at Fort Zachary Taylor Beach, a place we've often been to swim -- as much as one can swim there, where the waves break steeply after traversing deep water and suddenly hitting a narrow shelf of sand. When Paul told me he'd read this -- that oil had moved into the current that would carry it to the Keys, and probably from thence around the tip of Florida and up the east coast, I had a physical response. A shut-down. A rupture. Entirely silent but something breaking. I've had this feeling, here and on Facebook posts, that people didn't want to read about bad news, and of course who doesn't feel inundated with the horrors of the news -- war and disaster, extinction and corruption and pollution and the endless failure of leadership? We've been hearing it all our lives and it's only gotten worse. But somehow this sense of steeling ourselves against the realities of the world needs to be broken through, or set down for a while, in the face of this moment's gravity. I think Jack Gilbert is right when he says, in an unforgettable poem called "A Brief for the Defense," that

We must have
the stubbornness to accept our gladness in the ruthless
furnace of this world. To make injustice the only
measure of our attention is to praise the Devil.

It's true, but conversely it is also the case that something as grave as the murder of the Gulf of Mexico -- and how much ocean on beyond it -- is so overwhelming an instance of"ruthless furnace" that we need to lay the private gladness down, the good sense of being a living body. We need to be willing to weep, to be outraged, and to ask every question we can about our endless, characteristically American sense of powerlessness. BP says it's a minor spill, with minor consequences, and the turtles die, and the Gulf churns black, and in how many days or weeks will the coral reef be dead forever?


And now, on the evening of the 18th, tar balls on the beach in Big Pine Key, where the endangered key deer live. That means the oil is rounding the tip of the Keys already.

Yesterday, May 19, pure crude oil coating the wetlands of southern Louisiana, "as thick as chocolate syrup," sad the CNN reporter. Photos on Huffington Post of a dragonfly and a crab, covered in oil. Everything in the marshes touched by the oil, which include the marshgrass that IS is the marsh, holding the marsh together, will be dead in a week.
Posted by Mark Doty at 2:20 PM 22 comments: 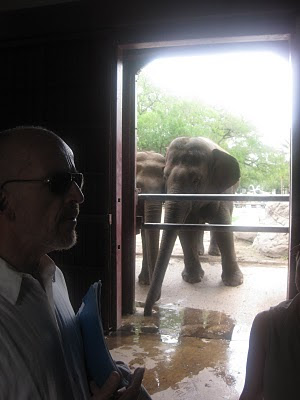 Paul took this picture when I wasn't paying attention yesterday at the Audubon Zoo. We were in the elephant house; outside you can see Jean on the left and Panya on the right. Jean and Panya were wild-captured about forty years ago, when each was around one year old. Jean was a circus performer, Panya a pet; they wound up in the zoo, where they've lived together for more than thirty years. Just after this photo was taken, we fed them a snack -- apples, pears, carrots, and their favorite, corn on the cob, served husk and all. Everything grabbed by the trunk and elegantly stuffed into the mouth, with pleasure -- save that Jean did spit out an apple, which is apparently not her favorite food.

Afterward, Panya grabbed hold of the metal gate with her trunk and rattled it like a small peal of thunder -- something she does, we're told, when she's happy.
Posted by Mark Doty at 9:38 AM 5 comments:

We're in New Orleans for the opening of the poetry project I've been working on for the last two years with the Audubon Zoo, a part of The Language of Conservation Project, which is installing poems as part of the permanent exhibits in five American zoos. Tomorrow evening, we'll take the first trainload of viewers through the zoo, stopping along the way to talk about some of the poems I've chosen -- including work by Dickinson, Whitman, Neruda, Hopkins, Langston Hughes and many more. I haven't even seen the results yet myself. I can't wait for tomorrow, when I'll see what Terry and Mignon, the zoo's design team, have done.

This photo was taken last this afternoon from our hotel room balcony, five floors above Orleans Street big humid Gulf Coast clouds piing up, and the ninety-one degree heat suddenly softened by wind off the water, smelling of moisture and -- oh what have we done-- petroleum.

Later, in the night, just after Paul had fallen asleep, after we'd drawn the curtains over the balcony doors to muffle the revelry coming up from Bourbon Street, one melancholy and soulful voice, a young man, I thought, singing acapella: I was raised by the river, in a little shack... Like the very ghost of Sam Cooke, right on the corner of Royal and Orleans. 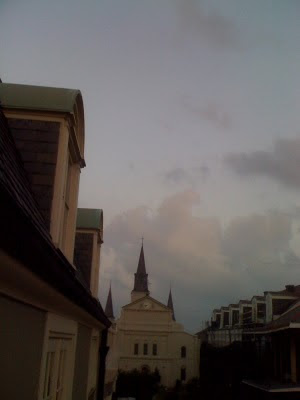 Lush and spilling over

Readers of this blog will have noticed a good patch of silence of late: end-of-semester (and so of my wonderful Whitman-Dickinson-Twentieth Century Seminar which I wish just went on and on) meets National Poetry Month. I would be relieved, next year, if we instituted something like National Poetry Morning, or maybe National Poetry Tuesday. I understand, of course, that attention is a good problem to have, and also that I could say no a little more often. But the colleges and other venues where I read understandably want to schedule events during poetry month, and so before you know it April's calendar becomes a scribbled and crosshatched road map. And as the month proceeds, I seem to have less and less of an inner life, and must concentrate carefully on reservations, tickets, schedules... lest I do what I did yesterday, and confidently jump on the wrong train, only to find myself heading into the wrong part of New Jersey and not able to get where I need to be at the right hour. Thank goodness for cheerful sponsors and patient audiences!

But last night I got to the Springs, after a pleasant afternoon in South Brunswick, and we had dinner in our favorite welcoming Mexican restaurant in Amagansett, and then drove home into an oddly warm night, the big sky out here between the dark bulks of the trees a streaked jumble of clouds and stars. A good night's sleep, and then, this morning, when I'd planned to spend the day in the burgeoning garden, it poured down rain.

But the rain made the garden glow more deeply, the blue of the ajuga electric against countless shades of green, differentiated by the leaf-shapes and textures that make leaves so inexhaustibly varied: strap foliage of Siberian iris, near-white curl of the tight fern fronds, busy matte-textured curls of the fountaining daylilies. Last year the garden had been such a banquet for the deer that it didn't seem anywhere near as green and full by early May. It's all a bit of a mess since I haven't been here to weed and attend, but because the garden's got a solid structure -- better this year, after lots of moving and fiddling last season -- it looks beautiful even in its neglect. Lush, spilling over -- partly the gift of this spring's wild rains. The woods around us are still full of brackish ponds, and every time it rains again they spill over onto the road.

I wouldn't be noticing much of this if I didn't have this day of shutting out whatever I'm supposed to be doing and simply looking. Exactly what body and soul want, after the surface-gliding of travel. Tomorrow I have to go to a reading, then introduce one, then go to a party in the city -- but I will be bringing the green along with me, invisibly, and it will be with me now for many months to come. No teaching this coming fall. So a long season of tending this place while I'm also tending the book that I've been promising will at last come together this summer and fall. An almost unthinkable luxury: June until December, to make of the pieces and scraps and essays I have of this project, which has been simmering -- oh, two years now, three? Of course I'm going to be traveling too -- Juniper Institute in June, Tomales Bay in October, readings here and there. But the focus, now, shifts toward home, and my body seems a little ahead of the calendar, already settling in.
Posted by Mark Doty at 3:47 PM 7 comments: