In Thirty-sixth Street it is raining. The middle-aged man who lives in the brownstone directly across from us is in the habit of posing in his window with a curtain partly wrapped around his naked body. He keeps guppies or goldfish in a lighted tank, spends the whole day in a kimono ironing, and at odd moments goes to the front window and acts out somebody's sexual dream. If I could only marry him off to the old woman who goes through the trash baskets on Lexington Avenue, talking to herself. What pleasure she would have showing him the things she has brought home in her string bag -- treasures whose value nobody else realizes. And what satisfaction to him it would be to wrap himself in a curtain just for her.


Andre Breton says in the Second Surrealist Manifesto: 'Everything tends to make us believe that there exists a certain point of the mind at which life and death, the real and the imagined, past and future, the communicable and the incommunicable, high and low cease to be be perceived as contradictions.'

A summer evening in Amherst

I'm at the Juniper Institute, a weeklong writers conference in Amherst. (Should one use an apostrophe in 'writers' conference'? I've never exactly figured that out; is that a possessive or a noun being used as an adjective?) This is my favorite summer conference: serious enough, good-spirited, esthetically diverse, characterized by openness and curiosity. Big storms come billowing up almost every afternoon. I've been coming for years, and each year I have a bedroom up on the second floor of Dara Wier's genuinely beautiful farmhouse a few miles north of Amherst. Every summer Dara's house makes me think about the nature of "genuine beauty," because her space is both so personal and so welcoming, and demonstrates her commitment to an individual and idiosyncratic sense of what is lovely, engaging, and pleasurable. "Idiosyncratic" is a compliment and a premise: is there any other kind of real beauty? Last night Dara hosted a dinner, for perhaps forty guests. In the afternoon there was a crate of eggplant in the kitchen, 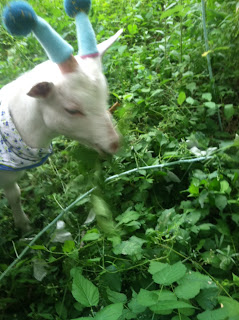 and great bowls of cucumbers sliced quite thin, and enough little tomatoes (in at least five colors) to feed a military band. I took a nap upstairs, and when I woke there was a rising and falling current of voices below. Soon people were spilling outside onto the terrace, gathered in all the rooms downstairs, and going outside to visit the special guests who appear in the photos here. That's Heather Christle stepping away from two quadrupeds, after feeding them peanuts. 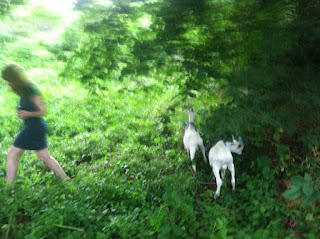 The stuff from which storms were built 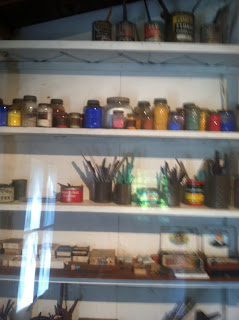 I photographed these jars of pigment this afternoon in Jackson Pollock's barn/studio on Accabonac Harbor in The Springs, here on the South Fork of Long Island. Apologies for the slightly blurry quality of the snapshot; it's a cell phone picture, taken in the not-so-bright antechamber of the larger, high-ceilinged painting space, with its famous spattered floor still bearing the traces of "Autumn Rhythm" and "Blue Poles," two great paintings of mid-century, as well as the spatters and drips of many more. It's an amazing space; I think even if I didn't know who had worked there, or didn't know those pictures, I'd still feel the difficult-too-name quality of energy there, the residual life. It's a kind of hum or buzz or undertow (see how these words feel like proposals quickly discarded?) that lingers in the spaces where great things have been made by a person in a state of profound concentration, perhaps in torment but probably with an equal quotient of joy. The last time I sense this was in Herman Melville's study in Pittsfield, MA, where he wrote all his major work at a table in the center of the a room which is, at least in my memory, a deep red, with a view of a strikingly profiled mountain out the window directly across from his chair. The room made me a little giddy; the atmosphere was vertiginous, electrified.

Last year, during the Abstract Expressionist New York show, a friend of mine was working at MOMA. On a Tuesday, when the Museum is closed, I went to the show with him, and we sat in silence in the grand room full of Pollock's masterworks.  Because of their size and vigor, and because I've always seen them in rooms full of people coming and going, commenting, I'd thought of them as loud pictures, announcing themselves with a flourish of trumpets, but they're not. In the room where I Larry and I sat, they seemed the quietest things in the world, deep pulsing wells of silence, radiating a meditative quiet of such depth that one couldn't quite hold back from entering them.

I loved seeing these shelves, the materials out of which those force-fields were made.
Posted by Mark Doty at 4:47 PM 2 comments: