I'm the sort of writer who is almost entirely dependent upon experience; my imagination goes into action when I try to look closely at what happens to me. Therefore I require the freedom to speak about whatever's going in in my life; if I declare some aspect off-limits, then the energy to create begins to wither  -- as if that one verboten zone becomes a toxic presence, and gradually I can't talk about anything.

The clearest illustration of this came recently, when I took on the project of reading a huge pile of my old poems.  David R Godine, the fine New England publisher who put out my first two books of poems, decided to reissue those collections in a new volume. (It's just out, by the way; it's called PARAGON PARK and it's a beautiful edition, with a vintage postcard from the old Nantasket Beach amusement park wrapped around the cover, a very inviting design.) In order to make the re-issue something new, we decided to include a selection of earlier, uncollected poems -- which turned out to be a bigger deal than I'd expected it to be.

I went out to the storeroom, sorted through boxes, pulled out some big piles of pages. Over the years, they've accumulated in a fairly random order, and there's a lot of stuff I wrote between the ages of sixteen or so and thirty-three, when my first full-length book came out. It didn't take long to realize that I wouldn't want anyone to read the vast majority of this stuff. One reason for that is that you simply can't tell what most of the poems are about; they act out emotion, usually longing or rage, without ever acknowledging the sources of these feelings. I didn't always know where these feelings came from, but in truth I certainly knew that I was avoiding talking about my own thwarted sexual life, the deep currents of desire which I had pushed down, as a young man, and attempted to pave over.

I did find a group of poems, written around 1980, that liked fairly well, and in which I thought I started to sound like myself. (What that means is a whole other discussion.) My life was opening, that year,
and I had begun to be more open with myself and with others. Freedom to speak in one area seems to lead to freedom in others -- like a gradually spreading thaw.

That was a long time ago, and my circumstances are completely different ones now. But I have noted how the big changes in my life over the last nine or ten months have made it very difficult to write here; I have been keeping a good portion of my experience cordoned off.  Blogs raise complicated issues about privacy and self-disclosure; how much do you want to say, and to whom, and when? Paul and I decided our marriage was at an end in July; it was overdue, I think, and our separation has been an amicable one. I love him and have great respect for him, and I also feel freed by this change and glad to be moving on. But who wants to talk about seismic changes like that, especially when they're brand new, in a blog post? Or on FaceBook? 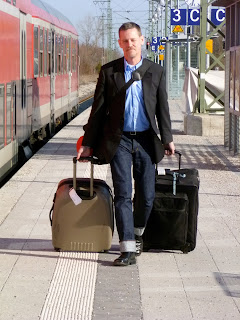 I thought I was going to spend a goodly period of time being single, something I've not done for sixteen years. But the forces that move and shift around us (and move and shift us around) had something else in store for me. I've known Alex for nearly three years now, and this summer our relationship shifted swiftly and dramatically. It's clear to me that the door to the next years of my life was waiting to open. There will be much more to come here about the new life; what I wanted to do for now is break this silence, and grant myself permission to speak. (Is there never just one closet, one coming out? Aren't we required to find the nerve to reveal ourselves over and over again? To experience that struggle and consequent coming into the light one more time?) 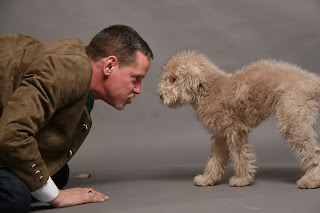 That's Alex, up above, this spring in Munich. And here he is (in a photo by our friend Peter Lau) with our little fellow George, who's become inseperable from Ned. Here's the joy in my life.
Posted by Mark Doty at 2:58 PM

Good luck with the new happiness. I look forward to more posts

I grapple often with those complicated issues about what we disclose and do not, and where the boundaries of honesty and privacy are drawn. So glad to hear about the doors swinging open, and as a huge fan of your published work it's such an honor and a joy to read your writing here.

I'm with you here, Mark, on the difficulties of writing creatively when one area of your life is cordoned off and becomes unmentionable.

You write about it so well here that it gives my heart a little skip, quite apart from the good news about your new relationship. There's something in the way you write about it here, the one door closing and the window opening, the way our lives go on and beg to be written about and yet sometimes we can feel silenced.

Yes, isn't that called life, for all its glory: Is there never just one closet, one coming out? Aren't we required to find the nerve to reveal ourselves over and over again? To experience that struggle and consequent coming into the light one more time?

Mark
It is good to have you back writing in this space.You were missed.

Cudos also for the real thought and care you took writing about this new chapter in your life.

Happiness is always an act of moral courage. Good on you for living into it. (Repeating myself) REALLY good to have you back here.

How about a post on Ned's new playmate. (Dumb question alert) What breed? Is he/she a breed? How old?

Thank you for posting this Mark, I follow your blog and have always found something in your experiences to think about and ponder on. The act of pondering may be given different names by different people but for me you have been generous enough to share those elements of your life that resonate with the authentic human condition and that always gives me pause for thought.
Doors, both opening and closing, may be the way we commence and finish each small journey within a larger one. I hope your new journey brings you much peace and happiness.

I just finished reading Dog Years and so loved finding an update on your blog. Bravo -- for the blog post, and most especially for that wonderful book.

Good to hear from you.

All the best from Mim

The cordoning off is toxic, I agree, just as giving oneself permission to be honest is liberating. I've come out of numerous closets during my life. Coming out as gay wasn't actually the most difficult one. I think the process an be layered. There was one publisher that I worked for, where coming out as pagan happened before coming out as gay, and that's the only place that ever happened that way. Coming out for me has been tangled up with self-acceptance many times. So coming out as smart, and coming out as a composer and poet, have been self-esteem issues.

There are aspects or my life I don't disclose on my blog. That's not what it's for. And there are other things that I find myself not discussing mostly because I still remember the Burning Times.

I read this post and certainly was surprised and I'm happy for you in your new life with Alex and with George. Nothing is like a new swinging door with a new Bedlington Terrier. I do hope someday our lives cross again. At least for Lily and George to meet.

All the best to you.