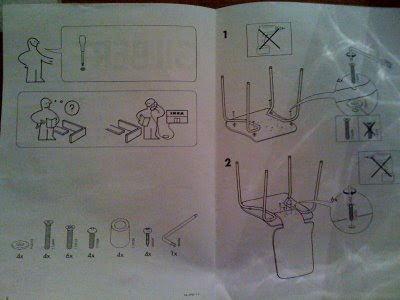 I do like the man in the upper right though, who appears to be saying, "Screwdriver" as a pictograph. The pictures on the right, which tell you how to perform the first two steps, are actually confusing at first and then begin to make sense as you understand that the circular forms represent close-ups, and the rectangular boxes give you extra information either about what piece you need or what you shouldn't do.

Would this be easier in words? Or a combination of words and pictures? The assembled result is a dining chair. I bought a coffee pot from IKEA, too, which came with a tiny brochure in 18 languages, including Hungarian. There is something dazzling about it, the notion that this same coffee pot might be unwrapped this evening in the Czech Republic, in Finland or in Portugal or China. I know that global capitalism can streamline the individuality out of practically anything, but nonetheless there's something pleasantly populist about my coffee pot and these drawings intended to be read globally. (That's a nice thing when you're shopping there, too, how wildly diverse the place is, as if every sort of citizen were on hand, all cheerfully intermingling.)

On the way home from IKEA we stopped at the grocery store, and our dinner purchase included a bag of frozen organic vegetables called Eat Your Greens -- pretty attractive, as it had asparagus, edamame, spinach, green beans... I didn't read the rest of the package till I opened it up over the stove, only to discover that it was a product of China. How much carbon, to get these frozen greens (which truly were pretty good) all the way to the eastern end of Long Island? Ugh. The world has been moving through our dining room tonight, for better and for worse.
Posted by Mark Doty at 8:55 PM

I love the ikea how-to sheets. It boggles my mind that they can make pictures universal and almost legible across dozens of cultures. I too imagine my bar stool or book case being assembled in Japan and the Czech Republic and a tiny town in Massachusetts.

"I know that global capitalism can streamline the individuality out of practically anything, but nonetheless there's something pleasantly populist about my coffee pot and these drawings intended to be read globally."

What an funny and astute observation. I recognized those directions as IKEA right off the bat. They are cute, as far as directions go, but woefully inadequate when it comes time to put anything together.

when all was said and done, mark, did you have one weird lock washer left? and really, is there nothing better than assembling something?
i love the picture. but even more, i love the idea of someone taking the picture.

My 14 year old boys have been asking me a lot of questions about Globalization and "the New World Order" (14 year old boys love conspiracy theory). Discussion gets murky when we get into world trade and carbon foot printing; 14 year olds aren't so fond of paradox and ambiguity.

I'm very curious about these paradoxes; the way our worlds have opened up with communication, how close, but yet how far away we are from what shows up in our stores, or on this little box where we banter back and forth.

Check out this couple from Utah where they are smack in the middle of Mormon mormon~ness they are dedicated to this very unique life of urban homesteading, and artistic community development.

I wonder if someday no one will need to read anything.

Granted, it's a good idea to make stuff easier. There's too much stress in our lives as it is.

And I get that these quickstart pamphlets and assembly sheets are meant to reach people of all languages...in the cheapest manner possible.

But dayam. How many generations till the only way we can communicate with others, on paper, effectively, will be in cute little pictures?