summer in Orient, the grave-markers of slaves 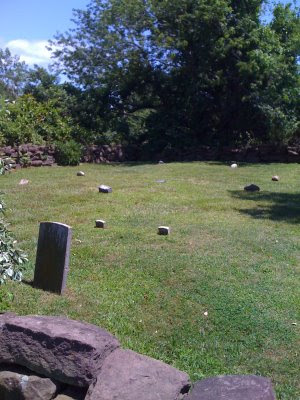 Today I drove Paul to Orient Point, so he could catch the ferry to Bridgeport; he's off to teach for a few days at a low residency program at Fairfield University. The day was amazing, since after last night's demi-hurricane the air was clear, and the greens of the leaves seemed all aglow. We had a little extra time, so we drove around Orient, which might be the most beautiful little Long Island village of them all -- pristine rows of clapboard houses along very green lanes, and only a realtor, a post office, a general store and an ice cream shop for retail life. We drove down the main street, followed the curve of the land along a small harbor or bay through moist-looking fields, then along a small patched road to a town beach spotted a placard beside the road. It turned out to mark the grassy path to a small, stone-walled cemetery just where solid ground ended. Here a group of slaves who worked the oyster ponds nearby until the 1830s were buried. A white couple, the owners of this particular oystering operation, had chosen to be buried with them, and their graves were marked by a pair of carved headstone. But beyond those were simply rows of stones -- no carving, no names -- indicating the graves of the the unrecorded ones. The most achingly beautiful spot, and in it these un-inscribed markers.
Posted by Mark Doty at 8:17 PM

It is so particularly moving to me that the white couple chose to be buried with their slaves.

I realize the situation is complicated by the owner-slave relationship, but still, one has to believe that these particular slaves were treated differently. I hope, better.

There is a place near where I live called the Dinsmore Homestead and they too are buried with their slaves. I disagree with you, galincal, that this is moving. I would imagine that the family pets are also buried in these plots of land. I find it tragic, and while a part of me also believes that these slaves were probably treated better than some of the ones on plantations, it seems ultimately unlikely to me that they would see their slaves as anything more than their valuable property.

But we are agreed that the slave-master relationship is a complicated one.