A grackle, a woman weeping, projection and big news 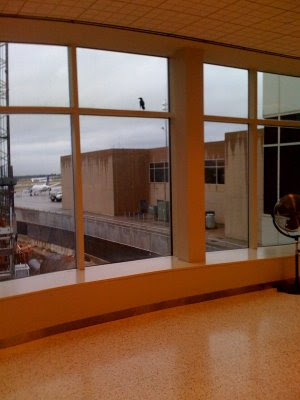 In the airport in Houston, I was waiting in the security line when I saw this bird, a boat-tailed grackle who'd somehow gotten into the terminal. He was flying from the windows on one side of the line to the windows on the other, and he would stop before he struck the glass -- he knew what he was doing -- and chut a few times as if calling to someone or stating his alarm. Then he'd fly to the other side again. Someone behind me said, He wants to go home, and that surprised me, because I was thinking, he wants to be free. Of course the person behind me wanted to go home, and I guess I must have wanted, at just that moment, some more freedom.

I was thinking about this on the plane, when a young woman across the aisle and row behind me began to weep uncontrollably. You could feel everyone not looking at her. I offered her the box of tissues I was carrying but she said No, thanks, and kept on crying. She was seated beside a man who was maybe traveling with her, maybe not. In a while I heard them talking. She said something about "tearing my heart out," he said something about "your episodes." I began to make up narratives about them: it was a break-up, or he was taking her to rehab or a hospital against her will, or he was a stranger hired by her family to take her someplace she's be deprogrammed. It wasn't until I stood up to leave the plane that I realized the man was probably her father, which suddenly placed the little quasi-narrative in a whole new light.

These two scenes had this in common: someone else's pain was flying above us or flowing around us, and we the spectators were trying to incorporate it in our lives by making a story, or we were making use of it to tell a story about ourselves.

This was on my mind when I walked onto the jetway, and stopped to claim my gate-checked bag, and my phone rang. It was Terry Karten, my editor at HarperCollins, calling to tell me FIRE TO FIRE was a finalist for the National Book Award. And after that, I can tell you, I barely had a thought in my head.
Posted by Mark Doty at 9:21 PM

Congratulations, Mark! I think this nomination is the nomination for a book. And such fine company!

I believe I want to go home--and be free!

Congrats, Mark. It was an honor to introduce you last night and chat with you before and after the festival.

I look forward to interview for the fourth issue of LIMP WRIST, which is schedule to go live Summer of '09. I'm beyond thrilled that you've agreed to the interview!

anything but poetry said...

Mark, Congratulations again on your nomination!!On Wednesday night, it was great to get an autographed copy of your "Sweet Machine" after getting to hear you read.

Mazel tov, Mark! And how cool is that the gay men rule the roost for these awards nods. 3 out of 5! Congrats to you!

The old wive's tale about a bird being trapped inside, someone has to die before it shall be set free... I hope he broke tradition.

Thirteen Ways of Looking at a Grackle, huh.

Yeah, I think torn between 'home' or 'free' I've have to opt for the free projection. Anyway, your grackles have set me to thinking of Stevens—who writes about grackles just fine, although some other birds tend to get too much play in WS and elsewhere.

AUTUMN REFRAIN
The skreak and skritter of evening gone
And grackles gone and sorrows of the sun,
The sorrows of sun, too, gone . . . the moon and moon,
The yellow moon of words about the nightingale
In measureless measures, not a bird for me
But the name of a bird and the name of a nameless air
I have never—shall never hear. And yet beneath

The stillness of everything gone, and being still,
Being and sitting still, something resides,
Some skreaking and skrittering residuum,
And grates these evasions of the nightingale
Though I have never--shall never hear that bird.
And the stillness is in the key, all of it is,
The stillness is all in the key of that desolate sound.