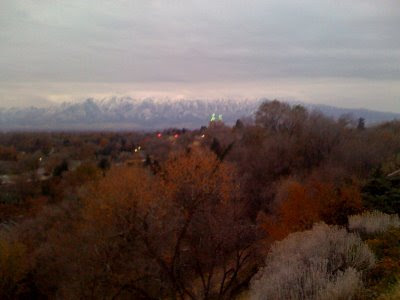 I'm staying on the campus at Utah State, and late this afternoon I walked down toward town for coffee. The campus is up on the edge of the foothills -- benches they call them in Utah -- and so the mountains loom dramatically behind it. This view is just on the edge of the campus, where you can look down across the whole valley. The picture's a little blurry because it was getting dark, but if you click on it to enlarge it you make out the startling presence of the snowy mountains on the other side. Those glowing towers are, of course, the Holy of Holies. Today in West Hollywood thousands of people protested in front of the Temple there, furious about the church's twenty-five million dollar intrusion into the lives of gay families.

In Utah the mountains always seem startling. I think that to the 19th century arrivals, they must have looked like engravings of the Holy Land, with those looming peaks over huge open expanses of dry grassland. And even now, it's like the mountains pull your attention up, away from the social world beneath them. This is an inviting kind of transcendence (I lift mine eyes to the hills...) but it's dangerous, too; if you've got your eyes on the sublime up there you might not notice the human landscape around you, where love and desire are not monolithic and singular, but various, diverse and uncontrollable. No matter how much you try to channel them into some kind of pre-determined template. All the repression in the world won't work, though it will make people miserable along the way.
Posted by Mark Doty at 4:47 PM

Beautiful, both the photo and the post. Templates--yeah--they are so limiting and impersonal; so full of fear.

Here is a poem I wrote about the Utah mountains:


I am awake hours before the sun,
looking at the dark shadow
that is my mountain. It’s hulking curve
lumbers and shifts slightly
with my every breath.

Whenever I come back to this place
after years of absence, it is the mountains
that startle me the most, their size
always shrinking in my mind
like the old memory of a broken arm.

Though the minutes pass slow
it is time well spent, waiting
with the world as it shakes off the night,
small details quietly gathering
beneath the shirt tails of morning.

Hello, All:
Ah, the Rocky Mountains, of which the Utah Wasatch Range are considered a part. Having grown up partly in Boulder, Colorado and the front range, I have an especial affinity for the Rockies.

Both Justin's poem and Mark's description of the mountains give me a hankerin' (Westerner talk) to be in them now. I see the foothills (or benches) and the temple when I'm at the SLC terminal transferring to a flight to Glacier Airport (Kalispell, MT). I'll be on my way there in less than three weeks for Thanksgiving. Can't wait for walks in the crisp mountain air of late autumn.

Jack, I love the verb "hankering".
It sounds like something Whitman would have said. I wonder what its etymology might be?

Mark, glad you asked. Your personal librarian at your service. My library's online Oxford English Dictionary has the following entry for the etymology of hanker:

[Not known before 1600; history obscure. Mod.Du. has hunkeren (Plantijn, 1673, hungkeren), dial. hankeren, in same sense. Generally thought to be frequentative and intensive deriv. of HANG v., but cf. HANK v. 6.]

1. intr. To ‘hang about’, to linger or loiter about with longing or expectation. Now dial.

PS
Glad the reading and after-reading went so well.