Eros in the middle of the last century 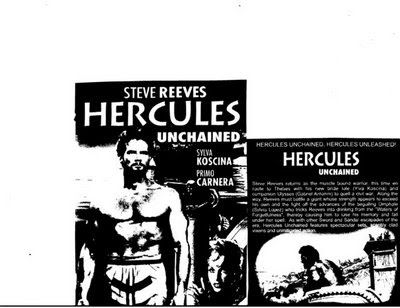 Thinking about Tony Dow got me to considering other early erotic imprints, and how I used to love Steve Reeves movies, especially from, umm, third grade till sixth or so. I'd look forward to Saturday's TV movies, usually Italian and weirdly dubbed, concerning the adventures of Hercules. These films always included dwarves, and busty Italian women playing princesses in danger, but the center of it all was Steve Reeves, in a loincloth and maybe a leather harness or a jeweled belt. I was fascinated by him, of course in part because in the years I'm talking about, roughly 1962 to 1966, there weren't a lot of available images of good-looking and mostly naked men around. But there was also something about the allure of the ancient world. Hercules moved through a landscape in which the gods might show up at any time, or whisper through the lips of a statue. They blew a gust from their lips and ships crossed the dark Aegean. The hero was always held captive in some temple where braziers burned in the dark, smoke going up to heaven, and the ancient world was perfect, sealed away, splendid.

A few years before, we'd lived in Nashville, and I have a very vivid memory of visiting the reproduction Parthenon there. Inside there were replicas (?) of Greek marbles -- horses' heads with their wild eyes, and fragments of centaurs. The twisting bodies were shockingly alive, even though they were unthinkably old and gave off a kind of damp, stony cold, almost an odor.

It was just a step, from the Parthenon to the movies I knew even then were silly, though they were completely compelling, too, centering as they did around the unveiling of beauty -- in another age, remote enough to be safe to look at, but somehow close enough to enter into my imagination and take hold.
Posted by Mark Doty at 8:57 PM

I remember seeing the Elgin marbles for the first time— that same almost-odor of cold stone and old, the white almost luminescent marble, the wild movements imprisoned in it, just at the very margin of breaking free of still.

Somehow, even if it isn't Athens, London seems a more appropriate site for this than Nashville. I remember walking, dazed, out into that old, old city and seeing stone everywhere.