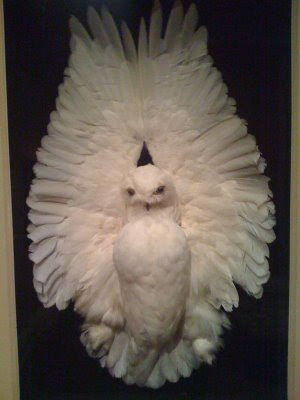 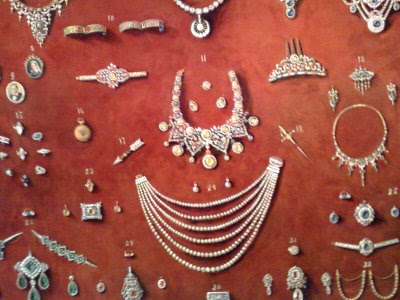 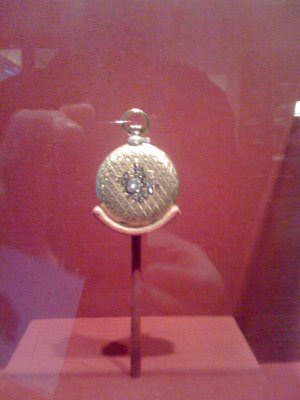 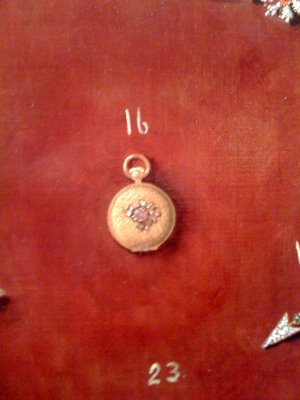 In the Cantor Museum of Art at Stanford there are some wonderful rooms devoted to the Stanford family and the founding of the museum collection. There are, for instance, the ears of the horse that Muybridge photographed for Leland Stanford, to settle the question once and for all of whether all four of a horse's hooves leave the ground while running. Muybridge invented stop-motion photography in order to solve the problem, and in the process discovered the working method of the motion picture, which you can see in action in a marvelous reconstructed machine -- something like a very early movie projector -- call a zoopraxiscope.

Stanford's son Leland Jr began an eclectic collection of natural objects (stuffed hummingbirds, curiosities, the snowy owl flattened into a shadowbox frame above), and then became interested in antiquities. When he died of typhus in Florence at the age of 15, his parents' grief caused them to memorialize the boy by founding a university in his memory. Early in the twentieth century, the new institution hit hard times, and in order to raise funds, Mrs. Stanford decided to sell her jewels. Since she was attached to them, she commissioned a portrait painter from San Jose to represent them first; above is his representation of the gems, spread on a red cloth, each one numbered. (It's a big painting, so in this little photo it looks more like trompe l'oeil that it actually does "in the flesh.") As it turned out, only one piece of jewelry was actually sold, so now her diamond-encrusted pocketwatch sits beside the painting. The third picture above is the precious timepiece, and the final one its painted double.

Goethe is supposed to have said, looking at a lavish still life by the Dutch painter Willem Kalf, that he would rather have the painting of the golden vessel than the vessel itself; he would prefer the representation to the thing to the splendid and valuable object itself. I'm inclined to agree, but there's a strange pleasure in going from the fancy watch itself to its painted image. It's partly that objects have a funny quality of timelessness -- there's the watch, in the room with me, in late January of 2009. A painting is an object, too, but you can't look at without being aware of when it was made; art always has a style, it carries with it the history of looking, the way of seeing and representing of its moment. Strangely, the object seems current (and not especially interesting, for all its value), but the picture has a sweet, dated charm to it, and it makes a sort of museum of this woman's jewelry, numbered and catalogued, and thus it seems to speak to the loss of these things, of treasuring what she imagined she'd lose. What did she think of the painting, I wonder, later, when she still had the sparkly stuff it depicted?
Posted by Mark Doty at 10:23 PM

What's terrific about these photos is that they complicate your distinction even further -- that's the reflection of the photographer in the glass case surrounding the 3-D watch, isn't it? Whereas the canvas, sweetly representing a way of looking, translates seemingly seamlessly into the digital photographic plane. And don't get me started on that fantastically eerie snowy owl! (an all too-easy figure for the institution itself. . . . )

I was in Barnes and Noble the other day, and they had a copy of Fire to Fire. I never read you before and so picked some poems by the intrigingness of their titles. Of course I picked the ones about the mackerel and green crab right away, as I like the ocean. Those poems seem similar to the Jeffers poem. Also, the theories of beauty were interesting. I ventured on to Atlantis (the poem), as I couldn't seem to put the book down. Though I still don't know what that poem was about, the ending struck me, an instant connection.

Why do human beings feel compelled to kill beautiful things so they can stuff them and display them for eternity, somehow missing the point of what made them beautiful?