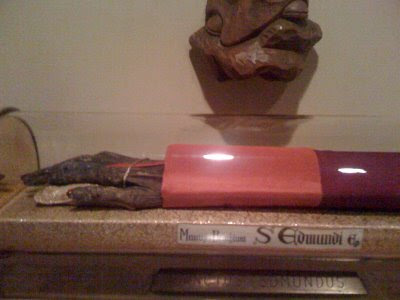 This is the right arm of St. Edmond, who died in the 12th century. It's displayed in an otherwise modern chapel on Enders Island, just off Mystic, CT, at a Catholic retreat center which used to be a novitiate of the Edmondites. It is, in its odd way, beautiful; the skin is like a kind of thin gray translucent leather, and it clothes the longish fingers, outlining the joint of each knuckle very clearly. It rests on a golden pillow, and there's a kind of sleeve which covers the arm itself so that what you see's the hand and a bit of wrist. On the tip of the thumb there's a bright red drop, I guess a long-ago attempt to indicate the holy blood that had coursed here. What makes this object beautiful, obscene and riveting all at once?

One answer might be suggested by the way that Rosamond Purcell (see below) finds fascination in objects in the liminal state of decay, things on their way to not being themselves any more. At what point is, say, a doll no longer a doll? When it's headless or armless, or the eyes or missing, or just when exactly? When does a book that's been ruined by rain or the actions of time cease to be a book? In that way, Edmond's arm raises questions about where the human ends; is this arm far enough away from its source that we wouldn't call it human? Not yet. Is it a thing? Yes and no. It persists in the zone of uncertainty, and if it really IS Edmond's, it's 800 years old, and going nowhere in any hurry.

There's the endlessly intriguing quality of the fragmentation of the body, the stuff of dreams and of anxious fantasy. To be fragmented is, of course, to disappear, but look -- here's this arm, persistent, inexplicably intact, present.

Underneath the vitrine in which the arm rests, there's a second case full of smaller things, lockets, a little monstrance, a collection of baubles. Many of them have windows, transparent chambers inside of which is a bit of hair, a vertabrae, an unidentifiable organic something. I love these. I doubt anyone knows now quite what they are, whose elements are contained there, but they're encased in silver and crystals and hung on silk cords, and all tumbled together.

(The Edmondites, by the way, don't seem to be medieval in the least. They've done pioneer civil rights work, and a group of them took off to Selma in the early 1960s, where, among other things, they founded a home for elderly, indigent African-Americans.)
Posted by Mark Doty at 1:41 PM

I love this kind of thing -- the bits of hair, a nail clipping, the fragility heightened to something everlasting. Or not.

I agree with Elizabeth. :) And thank you for writing such wonderful poems, Mark. "Now You're An Animal" is one that I particularly admire. The voice is memorable and memorizable. Thanks for it!

When I visited Mystic last year, the owner of a small bed-and-breakfast recommended I visit the monastary on Enders Island. I didn't notice Edmund's arm (!), but I did photograph the chapel's beautiful stained glass and the labyrinth garden outside. Did you see the outdoor chapel that opens toward the sea? People leave their petitions and prayers on a stone altar, scribbled on notes held under bits of stone, shell, and driftwood. I read some- they were heartbreaking- then left my own note... of thanks.

as I was almost falling asleep last night I was tormented by the question of what happened to the rest of the body. How do relics become relics?

asking in the very mundane sense as well as also greatly appreciating the bigger, far more interesting and less concrete thoughts and questions .

Janet, there's a quite a bit of information about the history of Edmond's body at www.sse.org/pdf/TranslationoftheBodyofStEdmund.pdf

Really interesting stuff about how the incorrupt body was displayed, and how it stayed both fresh-smelling and pliable, but it doesn't really explain how the arm came to be separated from the rest of him. His body was interred in a French abbey at Pontigny; perhaps the majority of it is still there?
The article's chronicle of the journeys of the arm is pretty great.

One more note. This website (http://catholicfire.blogspot.com/2008/11/saint-of-day-st-edmund-of-abingdon.html) would suggest that least SOME of Edmund is still at the abbey. Exactly who removed his arm, and when, remains unclear.

one of the stranger bequests to my alma mater, drew university, is a finger from an important methodist (there is still a seminary at the school). no one but seminarians are allowed to see it, so while it remained known as 'the methodist finger' to those of us unaffiliated with the church, we don't actually know which finger it is.