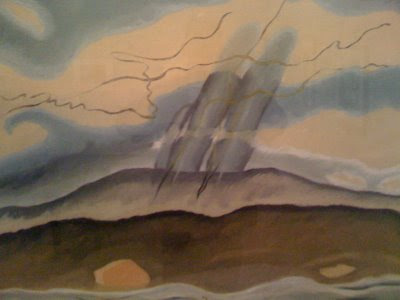 I've been thinking about Robinson Jeffers, surely the great California poet of the twentieth century, and the cold vigor of his response to the coastal landscape, the world of rocks and tide, fog and hawks and seals. A few days after posting the photo below of sea lions floating off the pier at Santa Cruz, I came across Jeffers' poem "Animals." It's an odd poem, in the way that it moves from an evocation of the marine creatures in their cold element to consider the hot colors of sunlight, and to suggest that the sun is also alive with burning creatures. Jeffers often wants to put human life in its place, in a long, geological perspective, and that impulse must have to do with the sublimity and scale of the Pacific Coast. This poem's unexpected final sentence considers the world's many lives, and chemical processes entirely unlike our own. Weird, given where this poem started out, that it ends on "amino-acids."

The painting above is an Arthur Dove, from the Cantor Museum at Stanford, and roughly contemporaneous with the Jeffers poem. It feels like it's also interested in the dynamism of natural processes, of bringing the conceptual vocabulary of science into art.

At dawn a knot of sea-lions lies off the shore
In the slow swell between the rock and the cliff,
Sharp flippers lifted, or great-eyed heads, as they roll in the sea,
Bigger than draft-horses, and barking like dogs
Their all-night song. It makes me wonder a little
That life near kind to human, intelligent, hot-blooded, idle and singing,
can float at ease
In the ice-cold winter water. Then, yellow dawn
Colors the south, I think about the rapid and furious lives in the sun:
They have little to do with ours; they have nothing to do with oxygen
and salted water; the would look monstrous
If we could see them: the beautiful passionate bodies of living flame,
batlike flapping and screaming,
Tortured with burning lust and acute awareness, that ride
the storm-tides
Of the great fire-globe. They are animals, as we are. There are many
other chemistries of animal life
Beside the slow oxidation of carbohydrates and amino acids.
Posted by Mark Doty at 9:45 PM

Yes, what an odd ending for a poem that begins so lyrically. It sounds flat to my ear. The poem which was starting to open up thematically, moving from sea to sky, confounds expectations by closing in so small. I wish he would have ended the poem earlier or kept going, developing those last ideas further. The last line draws me into the science lab out of the natural world--the poet/scientist shows his hand, putting the poem together syllable by syllable, word by word as nature builds proteins.

I wonder about the ending too: the 'slow oxidation of carbohydrate & amino acids' doesn't sound as lively as the 'rapid and furious lives in the sun' or the 'beautiful passionate bodies of living flame.' It is indeed cold like the water the seals are in, cold like science?

You must have caught this piece in the NY Times? Another (variation) of appreciation on your Mound of Butter!

(It's not the same Times article you referred to ---it's the artist Maira kalman's experience of the inauguration..)

I had a shop near the sea lion docks in SF.
What a percolating profile...Jeffers rocks!
TK

Jeffers often states his preference for animal life over the trivial ways of human beings, honoring the clarity of purpose and the nobility of hawks or horses or even an English bulldog. But I think this time he goes one step further, which is to suggest that we over-value the animate -- or perhaps think that the only things that are animate are those that, like us, make use of the familiar chemical processes of organic life. Maybe it's human arrogance to think the flares of the sun aren't alive, or the slow
steady soul of the granite.

that's worth ten poems right there

Now that's a beautiful phrase, 'the slow steady soul of the granite,' begging for its own poem... if not already done.