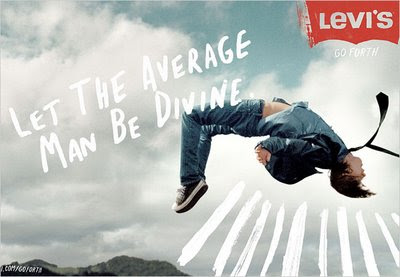 Nice to see poetry eking into the broader societal mainstream, no matter how abbreviated (or unattributed). I think Whitman wouldn't object.

Peter, I think he'd appreciate the blue denim, as opposed to say, Dockers.

I'm an aspiring poet, having studied under Carol Muske-Dukes, Grace Schulman, and April Bernard, in Baruch College's Sydney Harman Program. I was wondering if you were giving any poetry readings in New York City this summer.

I live in Astoria so it is relatively easy for me to attend.

Hope you enjoy the summer.

to say nothing of the flesh:
But the expression of a well-made man appears not only in his face,
It is in his limbs and joints also, it is curiously in the joints of
his hips and wrists,
It is in his walk, the carriage of his neck, the flex of his waist
and knees, dress does not hide him . . .

Walter would love this ad!

Walt, a Levi man for sure:

"No dainty dolce affettuoso I,
Bearded, sun-burnt, gray-neck`d, forbidding, I have arrived,
To be wrestled with as I pass for the solid prizes of the universe,
For such I afford whoever can persevere to win them."

Cornell, nothing scheduled till September, when I'll be at the New School. See listing on www.msrkdoty.org -- there'll be more stuff added in the city later on, but right now I'm on summer break, more or less...

Glee, Mim, wonderful quotes. I especially love "dainty dolce affetuoso." which is such a weird funny label -- as elsewhere when WW
says that cologne is for "foofoos."
These are pretty hilarious 19th c versions of "sissy."

Julia, where in the Springs? I LOVE it here, I'm so grateful to have found it.

Mark, I lived at 35 Harbor View Lane, in the Springs. I return constantly, in my dreams, and sometimes in person, to the East End. I was an early denizon of Canio's Bookstore.

i've not seen the ads. is there any attribution to Whitman so someone could see it and hopefully go and become familiar with his poetry?