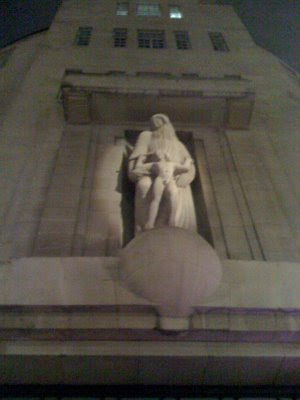 Today I did two radio interviews, one for National Radio in Ireland, and one for Night Waves on the BBC's Radio 3. The Irish interview took place in a studio in Oxford, so I couldn't see my interviewer, just hear his voice as he delivered a set of questions and responses to my book THEORIES & APPARITIONS so insightful that I was happily taken aback. I don't think the book has found such an insightful, active reader, one who drew subtle connections, mapping out the architectural structure of the book with an acumen so sharp that I felt instructed about the poems myself. This just wouldn't happen, couldn't happen, in the U.S., not only because we simply don't have radio like this but also because we barely have such poetry critics.

Later, I went over to Broadcasting House in London -- see their moody, beautiful sculptural facade, above -- and appeared on Nightwaves, a wide-ranging cultural program. Present were a theatre critic talking about a production of Love's Labor Lost, a film historian discussing Hunger, a new documentary on an IRA hunger strike in an Irish prison, and yours truly. The interviewer handled all of us with equal ease, and he was consistently penetrating, charming and alert. We talked about John Berryman, Wordsworth, Whitman, Emerson and Thoreau. I couldn't help but think about the relative poverty of American cultural life by contrast; here was an urbane center, where arts and ideas of all sorts were held in esteem, and taken seriously through an attentive, critical, engaged examination.

And then I walked out, an hour later, into a snowstorm. Honest. It seemed the weirdest thing, the windshields of the parked cars all gone completely white.
Posted by Mark Doty at 4:39 PM

It's just this that makes me all girlishly giddy in finding you here, to read thoughtful reflections and consider, with such ease the thing that makes us most human, our potential to live and embrace an artful life.

So in gratitude, tonight after working on phonics with teenagers who cannot read, I had the pleasure of selling two of your books at the bookstore (Dog Days, which we cannot keep on the shelves, and School of the Arts).

I attempted to post earlier, but must have left it in preview mode and it never got posted. For those of you who'd care to listen in, I found the Nightwaves broadcast available online at http://www.bbc.co.uk/radio3/nightwaves .

In the immortal words of the Three Stooges, "Why Soitanly!" Just a cautionary word - I just checked the BBC Radio 3 website and it appears there are only five days left to listen to the Oct 28 broadcast. I would imagine that all of their past broadcasts would be archived somewhere, but perhaps not. Perhaps they just allow them to evaporate into the ether. By the by, welcome home, Mark.

That reminds me of the Irish-American plumber (Paddy the Plumber?) who was doing some work on our house in San Francisco and, when he noticed a few poetry books lying around, took a break and recited half a dozen poems for me by heart (Yeats, Heaney), and said it was no big deal--he'd gone to Irish schools as a child so of course he knew many poems by heart.